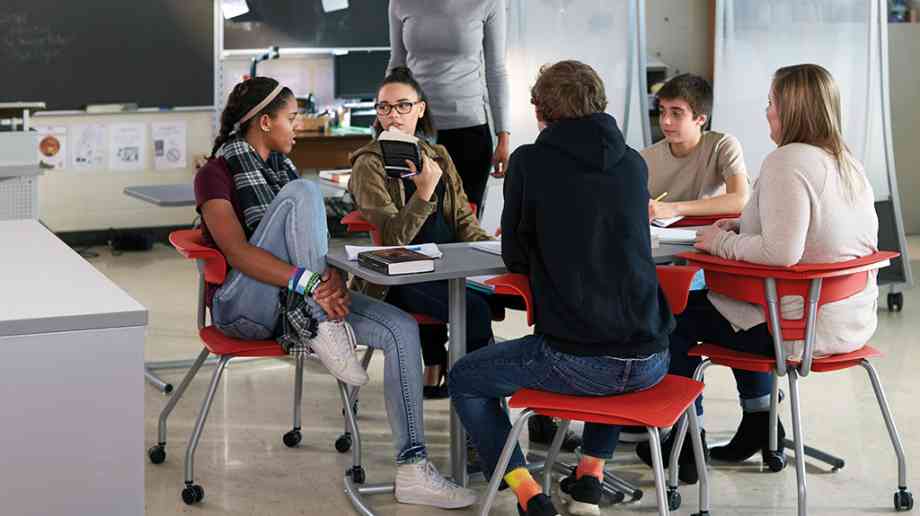 The right space to learn in

How can having the right classroom furniture impact on education and learning? BESA’s Cleo Fatoorehchi investigates

At the University of Warwick, there was a room called the Reinvention Centre which welcomes students into an open, creative space. It is a large, empty room, only populated with a few bean bags, colourful cubes, a couple of benches and other reclining seats spread around the place.

Since its launch in 2006, many universities have followed this up with their own creative spaces. Among them, the University of Sussex and the University of Brighton created “Creativity Zones”. If research has proved the correlation between the environment and creativity, new research is being conducted every day to explore a potential link between the environment and learning.

THE LEARNING SPACE AND PROGRESS

One of the leading experts in this field is Peter Barrett, Emeritus professor at the University of Oxford and professor of management in property and construction at Salford University. His interest in the impact of the value of the built environment within society led him to study the connection between the physical design of schools and academic progress.

In his most recent work, entitled Holistic Evidence and Design (HEAD): sensory impacts, practical outcomes, he found strong evidence of the impact of school design on learning in primary schools. Indeed, the report claims that differences in the physical characteristics of classrooms explain 16 per cent of the variation in learning progress over a year for the 3,766 pupils included in the study.

Another of his studies revealed that school design had a 25 per cent impact on 751 pupils’ learning rates. As Professor Barrett explained: “In comparison, variations in teacher quality is estimated (by others) to account for 12-20 per cent,” while “70 per cent of the variation is explained by the individual characteristics of the pupils themselves.”

In the HEAD study, Professor Barrett and his team developed the “SIN design principles”, a set of three physical characteristics of the classrooms: Stimulation, Individualisation and Naturalness. Naturalness is associated to light, temperature and air quality; individualisation to ownership and flexibility; and stimulation refers to the complexity and colour.

“We worked with sense specialist and neuroscientists and this led us to consider the way the brain processes multiple inputs of sense data,” Professor Barrett told BESA. “By standing back from this, we proposed the three SIN categories as things that humans seek for their well-being. This translates to a proposition that if optimal, they would be good for children’s learning.”

And indeed, they found these principles to be particularly influential in a child’s experience in the classroom, accounting for up to half the learning impact.

Flexibility is very much picked up on by universities, schools and companies, to try to give a more conducive environment to learning to children and students. KI Europe, for example, is an education company that has always been mindful of including an element of flexibility in its products to schools via the “maker-centred learning environment”, which its education sales director Kevin Geeves describes as “founded on interdisciplinary sharing and learning in an active form, allowing participants to express their curiosity and share their learnings across disciplines.”

Geeves told BESA: “Engendering an entrepreneurial spirit, this new style of learning is especially suited to design‑centred curricula. In place of the traditional lecture theatre is a flexible space that can accommodate materials and shared workspaces adept at prototyping, testing and sharing perspectives.”

He added: “Often accessible 24/7, these spaces encourage learning that feels more like play than work, but with a purpose – maximising creativity, problem solving and interaction.”

Problem-solving skills are in high demand by employers, who increasingly value such “soft skills”. Indeed, employers now look for what some call the “21st century skills”, with an influential school of thought believing that knowledge acquisition and retention will not be as relevant as before in an era where the possibility of a Google search is now always at our fingertips.

In their new book, ‘Great Minds and How to Grow Them’, Wendy Berliner and Deborah Eyre suggest that education is in the process of acquiring a new meaning and purpose. Berliner told BESA: “First calculators did away with the need for basic computation, now Google has done away with the need to store vast numbers of facts in your brain. Instead you need the flexibility and adaptability to make new connections with information rather than a storage facility.”

Experts, including Mark Cahill from Manpower, estimate that 65 per cent of jobs that the next generation will have don’t yet exist, and the education system needs to reflect this new employment landscape. Among other changes, it needs to strengthen children’s skills to adapt, to change, and to think critically, rather than focusing on process-driven tasks.

Berliner added that the environment in which children learn is just as important as what they learn. “Just as the ability to pass exams and tests is less important in the long run than the soft skills that allow you to collaborate, be empathetic and open minded and resilient to setbacks, we need to ensure that the surroundings we learn in are adaptable to change,” she said. “Sometimes we need to learn alone, sometimes in groups, sometimes in large teams. Fixed surroundings are as bad as fixed ideas in an age of such great change.”

This was corroborated by research that KI Europe conducted, where they found that children are more responsive and active in their learning if they have furniture that adapts to them, compared to the rigid and inflexible furniture that was widespread until quite recently. Geeves explained that, since comfort and good ergonomics lead to better attention and concentration, furniture has become an essential component in defining the performance of a learning space.

“Encouraging positive fidgeting is shown to enhance retention and learning outcomes, so furniture could either facilitate or hinder this,” he told BESA. “If furniture is uncomfortable, difficult to reconfigure and rearrange, it limits the potential of the space, and subsequently the learning styles that it can support.”

If giving more environmental freedom to children enables them to be actors of their learning, it is driven by the potential of furniture to improve children’s academic progress and enhance their outcomes.

But schools have been going through some financial hardship over the past few years, and this has impacted upon their furniture spending. BESA’s latest research on Resources in Schools found an
eight per cent decline in furniture budgets in primary schools in 2016/17, and a seven per cent drop in secondary schools. This represents a £10.9m market reduction over two years across maintained schools in England.

This worrying trend can negatively impact the children’s learning spaces.

As Geeves said: “The durability of furnishings is sometimes overlooked but can also have longer term outcomes – budgetary constraints could mean broken or damaged furniture is not repaired or replaced, compromising the performance of an institution’s facilities.”

To fight against the funding cuts and enhance children’s active learning, BESA launched the Resource Our Schools campaign in early summer.

It is crucial that the impact of furniture and the environment on children’s learning process and academic progress is acknowledged and taken seriously, and to respond to this, schools must have access to the resources they need to deliver the education that our children deserve.