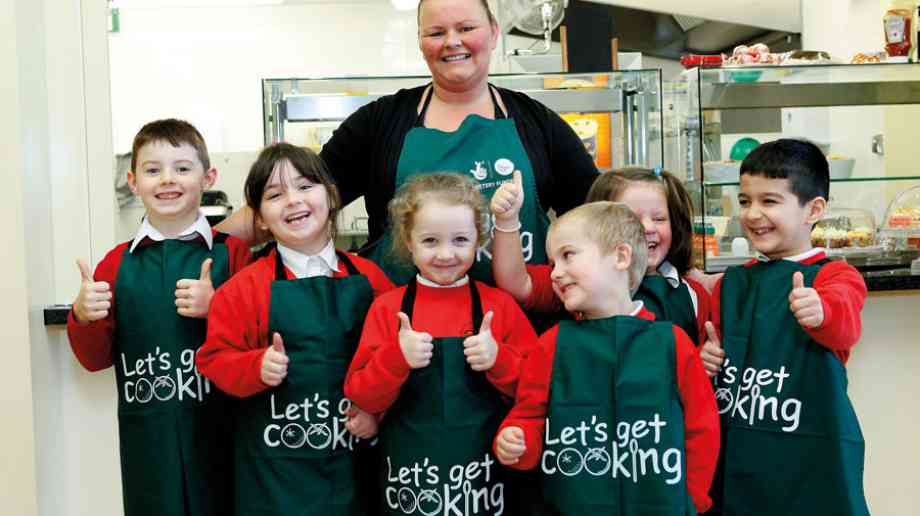 Let’s (continue to) Get Cooking

It is eight years since the Children’s Food Trust, a national charity on a mission to get children eating better, began its Let’s Get Cooking programme, which went on to become the biggest network of healthy cooking clubs in England.

So far, the Let’s Get Cooking programme has reached three million children and their families and the spread shows no signs of slowing, with The Tesco Eat Happy Project now supporting the network in primary schools and plans to expand into Scotland next year.

The clubs give children as young as five years old the opportunity to get hands-on in the kitchen to learn cooking skills. The younger children begin to master skills like stirring and sieving and progress onto knife skills and hot cooking. It’s a safe environment in which to have fun, build confidence, make friends, learn leadership skills and how to work as a team. The recipes, nutritiously analysed and devised with children in mind by the Children’s Food Trust team, give children a taste of different foods and cuisines and encourage them to eat a healthy varied diet. Children are more likely to eat foods they’ve cooked themselves.

After recruiting more than 5,000 clubs, in schools as far south as the Isles of Scilly right up to Northumberland, there’s much to be learned from the programme’s ‘train‑the‑trainer’ approach. So how do you facilitate 235,000 cooking sessions for children and families, train 11,500 volunteers to run them and keep funding coming for ingredients, equipment, resources and learning?

Let’s start at the very Beginning
Maggie Sims, head of the programme, said: “When it all began we knew our nation’s problem had already been horribly clear for far too long – we were eating too much fat, saturated fat, sugar and salt and not enough fruit and veg. We felt part of the problem was that our nation was quickly losing its ability to cook. Skills weren’t being passed down, so we were reaching the point where whole generations had little to no skills in the kitchen. So we decided to get the nation cooking again – starting with our children.”

With £20m set up funding from the Big Lottery Fund, the Children’s Food Trust led training events the length and breadth of the country to train volunteers from schools to create after-school cooking clubs, giving children the chance to learn the basics then build their confidence.

Clubs were recruited in every local authority in England, with priority given to schools in the most disadvantaged areas.

Maggie explained: “We were very clear that this was not about baking fairy cakes, this was about learning to cook real food. All clubs signed an agreement to cook ‘good food that is good for you’ and we equipped them to do this anywhere that had a ‘sink and a socket’.

“Our team was at the end of the phone for every volunteer and that’s how Let’s Get Cooking was born. We realised very quickly that the network was about much more than cooking skills. It uses cooking to bring people together, reflecting the very best of human nature.

“Our team heaved equipment around to train volunteer club leaders and helpers everywhere, from village halls to factory staff rooms. They drove through floods and snow drifts to make sure they didn’t let clubs down.

“As well as running the clubs, the volunteers they trained shopped for ingredients, washed tea towels and in some cases even drove children home from clubs – above and beyond their normal day’s work.”

Purpose
It would be fair to point to an increasing awareness of the consequence of poor nutrition and unhealthy lifestyles as the driver of the support Let’s Get Cooking has had so far, both financially and otherwise. Poor diet is one of the biggest threats to children’s public health in this country.

Maggie said: “Around one in five children are overweight or obese as they start school; that rises to one in three by the time they leave primary school. At the other end of the spectrum, teachers continue to report children coming to school hungry and families coping on the tightest food budgets say they put calories before nutrition just to get food on the table.”

Learning to cook opens children’s eyes to different varieties of food. The rise of convenience foods and takeaways in the last few decades mean some children have never seen their families prepare meals from scratch. Evaluation of Let’s Get Cooking has shown that over half (fifty eight per cent) of Let’s Get Cooking club members reported eating more healthily after involvement with the programme.

Maggie said: “Children, and some adults even, can’t identify some types of vegetable so they’d have no idea how to go about cooking them. The links are clear – learning to cook and being involved in this programme means that children and their families will go on to have healthy, happier relationships with food.

“But it’s people at the heart of what we do; it’s about changing their lives for the better and cooking can do that in so many ways, not just improving the way they eat.”

People’s stories
For mum, Kelli-Anne Broome, Let’s Get Cooking was an ideal way to spend time with her young son, whilst learning new skills. Kelli-Anne found the club to be a route to new opportunities, as she ended up volunteering in the school’s community café and gaining three qualifications in food safety and first aid.

Kelli-Anne said: “Before coming to Let’s Get Cooking my family and I would only make things like cakes from boxes at home. Now I can make things like mini quiches, healthy muffins, burgers and curries from scratch.

“It’s made me come out of my shell a lot and given me confidence, before I wouldn’t talk to the other parents but now I’ve made friends and get out of the house – I love coming to Let’s Get Cooking for the people and the chance to practice my skills. It’s been absolutely marvellous for me and my family.”

It’s this whole family approach that has helped the programme reach their three million beneficiaries (and counting!) Once club activities have ended, 91 per cent of club members continue to cook at home with friends and family, sharing their skills. On average, Let’s Get Cooking members share what they’ve learnt with at least one other person.

Maggie said: “Cooking is such a sociable activity – it’s a great way to build bonds. With funding from The People’s Health Trust we introduced ‘Lads and Dads’ sessions to clubs, and did some work with looked after children and their carers. It was a great way to reach people who wouldn’t normally think about cooking together.

“We want to help as many people as possible with our work, so when our funding with the Big Lottery Fund ended and we were approached by Tesco’s Eat Happy Project, we were really excited about Let’s Get Cooking’s future.”

Eating happy
The Tesco Eat Happy Project is the supermarket’s long-term commitment to help children have a better relationship with food through field trips, live video chats, hands-on cooking and much more. The project has pledged to support the Let’s Get Cooking network in primary and special schools across England for the next two years, and is enabling it to expand into Scotland for the first time.

The funding means the network can keep giving its club volunteers training on new ways to run their sessions, activity packs and new recipes, staff to support clubs when they need help and grants to help clubs buy ingredients and equipment. This work will mean up to half a million children get to cook with Let’s Get Cooking from now until April 2017.

Maggie said: “Companies like Tesco can have enormous influence to make things happen, with so many families interacting with them on a daily basis. This funding is an incredible opportunity to give many more children the chance to make that connection between where food comes from and the meal on a plate.”

The future
School budgets are often stretched, so each club is encouraged to think about ways they can expand and sustain themselves. Clubs have been so determined to continue, that they’ve gone above and beyond to safe-guard their future.
Cookery club leader Howard Rose, from Balsall Common Primary School, Solihull, secured sponsorship for his school’s club when the demand for places grew and then stepped in when its previous leader retired. The majority of the club’s ingredients are now supplied by a local hotel and they use eggs donated from a nearby farm.

Maggie said: “These investments change lives. We hear time and time again stories about young people who have gone from being completely disengaged in their education, or perhaps having a difficult time in a tough home environment, to flourishing and finding a real passion in cooking.

“Young people have pursued a career in catering as a result of being part of a club at school. It’s such a wide reaching programme, you can’t put a price on all of that impact.”

The network still needs funding to continue and support their clubs in secondary schools across the UK and with other Trust projects supported by big names such as Iceland, Uncle Ben’s and Pizza Express, it’s an exciting time while the charity explores new relationships.

Maggie said: “After eight years there is still so much energy and enthusiasm for what we’re doing. Each year there’s another generation ready to begin its journey with food – which is what, with the right support and funding, means Let’s Get Cooking will have a place for many years to come.”