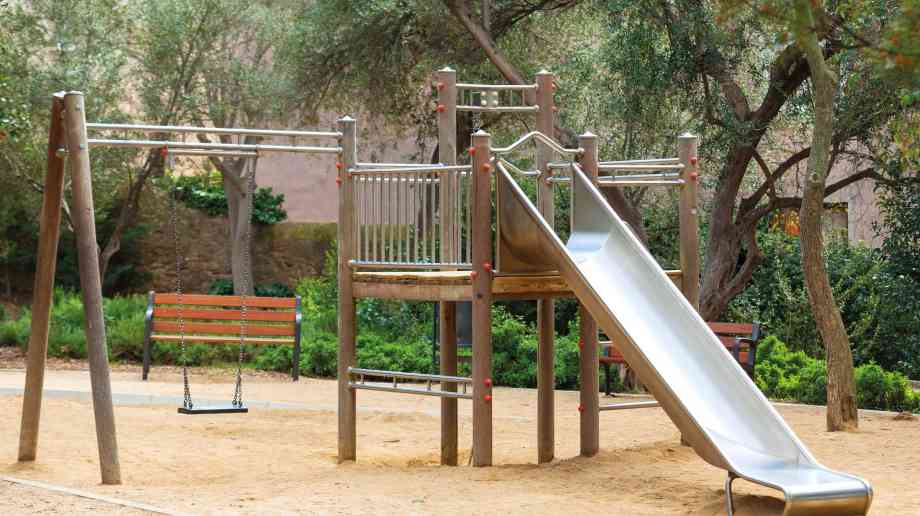 Why playgrounds are an essential part of primary school life

Play is more than just the chance to run around outside for a quarter of an hour. Play is just as importance in the development of a pupil’s social, emotional, intellectual and physical development as classroom learning, says Neil Coleman of Outdoor Play and Learning CIC.

When I was eleven, I’d put in about 45 hours hard, sweaty graft every week of the year.

Of course, I’m referring to the amount of time I’d be outside playing, running around like crazy after a ball, on my bike, up a tree, building dens and playing in sand and mud, all whilst sharing each important (to my social, emotional, intellectual and cognitive development, as well as my mental and physical health) experience with my mates.

Do today’s children enjoy the same privileges? No, sadly they don’t, and because it has been almost forty years since children had that amount of freedom, time and permission, we now find that the current generation is the most overweight and unfit in history. Perhaps equally concerning, they are also reportedly several years behind (compared with previous generations) in most aspects of their personal development. For all the focus on sugar and other calorie intake, only one fundamental aspect of natural childhood has changed for the worse over that time – kids play less. Up to 90 per cent less!

A slower generation
Many children today are only getting outside at all when they are in school, which is why we must continue to allocate well over an hour each day to playtimes. However, if they are to make up for the lost time and opportunities for playing, they will need to be of a much better quality and variety too.

According to a report Fitmedia ref provided to the All Party Parliamentary Group on a Fit and Healthy Childhood in 2015, one in five pupils leaving primary school is ‘clinically unfit’. Unable to sustain a running pace of 9.5 km/h (6mph), on average it takes them more than 11 minutes to run/walk a mile. This generation is therefore 90 seconds slower than their parents were at the same age, and as children have steadily grown bigger and heavier (since 1990 when modern measurements started) they have also become relatively weaker, with one in five unable to support their own bodyweight using their arms.

That means that around 1.5 million children with a true risk of long-term ill‑health are currently going undetected simply because neither the government nor our schools are taking a regular measurement of fitness, and they aren’t investing properly in active play either.

As if that isn’t enough, new neuroscience studies in the US tell us that play is absolutely fundamental to the proper development of the neuron pathways in the child’s brain which are used for learning, so the one fifth of school life which is allocated to play has become absolutely key to the development and well-being of every child. For 300 pupils that one fifth equates to 72,000 hours of play opportunity a year, and children are at primary school for seven years. Just think what all those children could learn in almost half a million hours of play while at school, if only the supervising staff were to be properly trained to enhance the range of environmental experiences being offered – what an untapped resource.

Cognitive development
So, having recognised the crisis, let’s suppose a school has determined to send all pupils outside every day to be more active, get healthier and become more engaged in their play. Play is strongly related to cognitive development and emotional well-being and, unlike an adult-controlled ‘sports’ environment, a high quality play environment can ensure all children exceed the 60 minute minimum moderate to vigorous physical activity set by the chief medical officer at little cost and without even trying. Surely it therefore makes sense to ensure they can make the most benefit out of their playtimes outside, otherwise they are mostly just going to stand around the margins getting bored and marking time idly, looking to create mischief, all whilst a small core group dominates the playground space with a ball. Are football and ‘first aid’ the primary playtime entertainments in your school? They shouldn’t be.

What if I told you that there are hundreds of schools in this country which are now so good at providing play that pupil fitness is high, overweight children are rare and negative playtime incidents are down over 80 per cent, simply because there is so much stuff to do?

What if there were schools where attendance is in the top five per cent nationally, as are their test results, and Ofsted rates them Outstanding in all areas, including for welfare, behaviour and personal development? What if there were schools who can claim they get an extra 10 to 20 minutes of teaching time each day, just because their pupils now come back into the classroom settled and ready to learn? And what if there were outstanding schools you could visit where the secondary school they feed into regularly remarks on the social, cognitive and emotional development of the pupils it receives, and where the staff are the happiest, have the lowest stress levels and have the highest job satisfaction? These schools can’t recall when they last had to exclude a pupil, because everyone is too engaged in having fun to cause any trouble!

It seems that no-one who manages, designs or builds new schools has the first clue what a good playground should look like but that doesn’t mean playtimes can’t be improved, as long as the right steps are taken. The key to better playtime provision, and therefore better behaviour, development, learning and health comes in four main steps; policy, access, risk and knowledge. A clear policy is essential for informing parents, governors and others about why play is considered valuable by a school.

Access to every part of the school environment all year round is vital in providing sufficient space and variation of social areas, journeys and experiences, otherwise engagement, activity and development won’t flourish. Risk assessment, and the proper management of safety matters, are obvious factors in ensuring a sensible balance between levels of challenge and child well-being, as the law requires. And without skilled staff being Knowledgeable in how to properly enable (and not to over-control) new and varied high quality play experiences, no amount of money spent on fancy ‘adult‑pleasing’ equipment, for that’s who it is mostly designed for, will deliver what the hundreds of pupils aged from five to twelve years old really need in their lives every day.

Immersing varied play
I wish I had a pound for every time a head teacher complains to me that their quiet area is the noisiest part of the playground. Of course it is, if it’s the only place where there’s anything interesting going on. One head teacher told me proudly how much his pupils were enjoying the new picnic benches on the grassy field, but if they are the only thing available what else did he think they would be drawn towards? With some tyres and a few tarpaulins they could’ve built a den or a car using those benches, which would’ve been far more enjoyable and beneficial to their development of teamwork skills and creativity.

What every school actually needs to learn is how to totally immerse every single child in the play activity of their choice, whatever their age, both genders, for the full time that they are outside. There’s a knack to it that can be taught, along with learning new staff skills on play safety and good play environment design.

Some children will always want a ball, they love it, and that’s fine but what about the silent majority who gather around the edge of the playground each day, waiting to be let back in because they are cold and bored? What is there on offer each day that challenges and engages them, which grips them with tricky problems that have to be solved using their grasp of maths and science, like working with their friends to balance a series of wooden pallets and cardboard tubes on top of several large cable drums to create a structure they can jump from. What about those little cosy corners where someone can play with their newest best friend? Where they can laugh together at their private jokes as the others pass by, unknowing. Where are the things which spark the narrative, the story which guides the play activity, and which leads to them eventually being more creative in the classroom, with their writing, their maths, art, PE, dance, science or lateral problem-solving?

High quality learning
These things don’t just appear by magic; someone has to create the places, gather the stuff, store it, check it for safety and make sure that things are disposed of once worn out. Someone has to assess the many risks and judge them against the benefits you teachers must surely have considered before bringing items and structures into the playground? And someone has to manage the staff who supervise those playtimes, ensuring they receive the training they require. Every school needs someone with the skills and permission to do all this so that senior staff don’t have to think about it.

What this means is that those schools which ensure their playtimes are of the highest quality are the ones who excel in many other areas of school life, often judged as outstanding for their levels of learning, behaviour, personal development, welfare and happiness.