Skip to main content
Home / Features / Teaching in another dimension 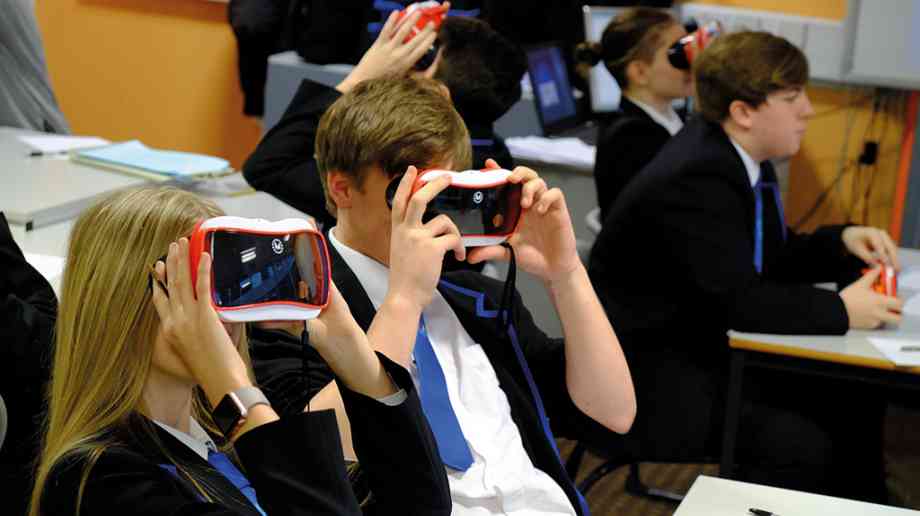 Teaching in another dimension

The use of virtual reality and immersive learning technology is growing in schools as it allows teachers to explain difficult‑to‑grasp concepts and take pupils to places that they couldn’t normally go. Education Business examines this trend

Schools requesting these forms of technology were up from 2016, which saw a focus on products like cameras, fitness trackers, and drones. This year, the majority of schools asked for tablets or laptops, while over a third asked for products associated with robotics, coding and drones. The number of schools asking for virtual reality technologies increased threefold from 2016, as a clear trend for using VR headsets to enhance learning emerged over the last twelve months.

So why is interest in this type of technology growing within schools?

The simple answer is that it enhances the teaching and learning experience in a way that text books and practical lessons can not. It enables students to visualise and experience concepts of science and explore sites and scenes from history.

Vassili Philippov, CEO of MEL Science, a company that has created virtual chemistry lessons, explains how VR can help teach difficult concepts. He says: “Where VR is irreplaceable is in showing kids invisible science, such as placing them inside a chemical reaction, where molecules fly all around them and they see how those molecules interact with each other. We can let kids play with atomic orbitals and encourage them to touch the orbitals, build their own atoms and molecules, and see what happens.”

GOING ON A ‘TRIP’

Virtual reality is being used to take students on ‘trips’ to explore landscapes for geography or to historic sites for history. They can even venture to places they couldn’t normally go, such as inside the human body, into outer space, or back in time.

Google Expeditions works where students explore the ‘trip’ using a virtual reality viewer that works with a smartphone, while their teachers guide the trip using a tablet.

The company has recently added 58 new destinations, giving a choice of 500 expeditions to choose from.

Google Expeditions has recently partnered with the British Museum to create a ‘trip’ exploring the Mayan Ruins of Quiriguá, Guatemala. A collaboration with the National Trust for Scotland also allows pupils to tour a Victorian era printing factory. What’s more, students can explore the deep oceans of Bermuda, Canada, and the Sargasso Sea.

Tom Gilbertson, the academy’s STEM coordinator, explains how the headsets have allowed him to explain difficult concepts easier. He said: “I have been able to deliver lessons with and without Google Expeditions and the difference is stark. Without, I am having to rely on my explanation being clear and suitable; very often I find myself explaining a concept two or three different ways. With Google Expeditions I have been freed up to provide more specific support and stretch my students – often beyond the level they need for an exam.

Students of all year groups at the academy had access to the experience, enhancing learning in all academic subjects from geography lessons to maths.

Mr Scotney, director of Mathematics at Ormiston Venture Academy, said: “The experience provided the students with an outstanding opportunity to put their learning into the wider context of places that they would never normally see first-hand. It was a great example of how technology can aid learning experiences in the classroom, and it was brilliant to see all the students so excited to get involved.”

Another reason that virtual reality is growing in popularity in schools is that costs are coming down, as the technology advances.

RedboxVR, for example, attended Bett this year, showcasing their Google Expeditions kits, which can be used with lessons plans linked to the curriculum that Google designed in collaboration
with TES and TWIG.

Veative, meanwhile, launched its all‑in‑one virtual reality headset at this year’s Bett, which it claims is the first educational headset to include a wireless controller and a built-in mobile device – eliminating the need for a separate mobile phone. The headset is currently available with biology, chemistry, physics and maths modules, all of which can be adapted for any language and any curriculum.

Students can sit down to use the headset, and use the wireless controller and movement from their heads to control the device. This allows them to explore, interact with, and manipulate objects in the virtual world. They can even carry out virtual experiments.

The kit comes with fully integrated headsets, a charging and storage unit, classroom controls for the teacher, over 500 VR and AR activities, structured curriculum-aligned lesson plans, unique gesture-based controls and a team of educational specialist ready to help schools implement the technology.