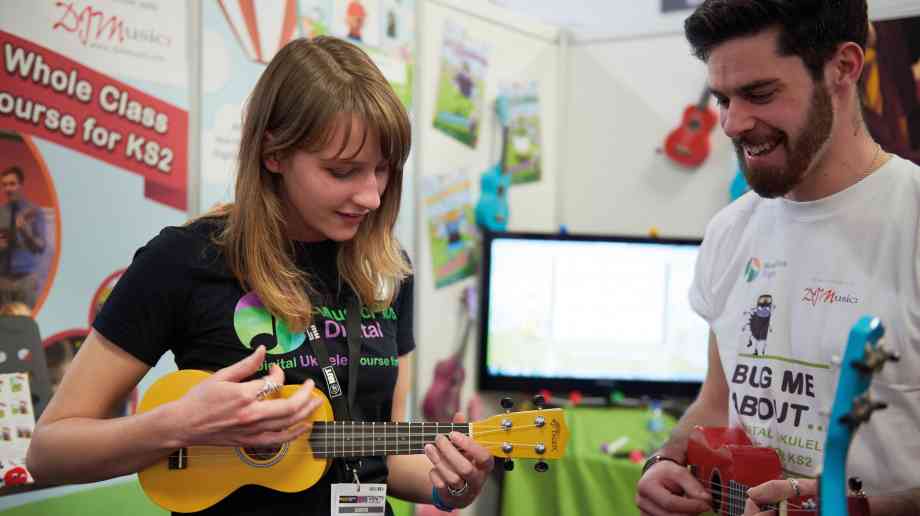 Europe’s largest music education event was bigger than ever before this year. Music Teacher magazine editor and head of content Alex Stevens reports on a successful two days.

At this year’s fourth Music Education Expo, it felt like the event really found its feet: a new venue in Olympia Central, more visitors than ever, and a programme which reflected and revealed the breadth and depth of excellent music teaching in the UK.

It also brought in another curriculum subject by running for the first time alongside the Musical Theatre and Drama Education Show, which provided many opportunities for cross-curricular learning, discussion and networking.

Programme highlights
From early years practice to high-level debates on the provision of music education for all, the programme aimed to provide a balance of practical, advice-led sessions, useful practice-sharing workshops and discussion to broaden thinking both on practice and the broader political context of musical and cultural education.

On top of those below, many of the most popular sessions covered subjects as diverse as mindfulness as a tool for combating performance nerves, daily warm-ups given by workshop leaders from Disney’s The Lion King – and a workshop on how to play the spoons.

In the classroom
For classroom teachers, popular sessions began on day one with the Bournemouth Symphony Orchestra’s Jonathan James, who helped delegates to ‘Find your inner conductor’ in a standing-room-only 45 minutes in which teachers were able to try out new gestures, to learn more about their impact on the performer: this sent them out with a spring in their step and renewed confidence in their ensemble leading skills.

Classical 100, the new, government‑backed initiative from music exam board ABRSM, Classic FM and record company Decca Classics, was introduced by ABRSM strategic director Lincoln Abbotts: the resource is built around 100 recordings of classical music pieces which teachers can draw upon in lessons, school assemblies and other school activities, alongside which there is information about the composer and stories behind the music – it is free to use and open to all schools in the UK.

World music percussion specialists Inspire‑Works ran two workshops: a fascinating guide to the use of this Indonesian orchestra in the classroom; and ‘What can I do with my music trolley?’, which demonstrated how to make the most of the percussion instruments in teachers’ classroom trollies, including some basic world music rhythms which are sure soon to be appearing in lessons up and down the country.

Teacher, educationalist and examiner Anthony Kerr-Dineen delivered a much‑talked‑about presentation on the role of character education in young people: how zest, grit, self-control, curiosity, optimism, social intelligence and gratitude (the so‑called ‘super seven’), can be developed in young people through the performing arts.

In other sessions for schools, James Manwaring, director of music at the Windsor Upper Schools, delivered a how-to on creating a sustainable, outstanding musical culture in school; Richard Llewellyn of Steinberg took delegates through using Cubase for delivering music technology teaching; and education consultant and former head of music John Kelleher took teachers through the options for performance using technology at KS4 – just a few among many well received sessions.

Send
Another theme was the provision of music education for children and young people with SEND. This strand included a panel debate which brought out some key examples of SEND best practice from the Music Education Council’s national awards for music services, with contributions from music education hubs in Hertfordshire, Brighton & Hove and Bristol (which is currently working to set up the first specialist training centre for young musicians with SEND).

Teacher Jocelyn Watkins and Jonathan Westrup of specialist provider Drake Music presented on their efforts to bring together coherent means of assessment and clear progression routes for SEND students in music education – after Jocelyn had found the existing systems inappropriate and too inflexible to work for her students.

Phil Heeley of Inclusive Music ran a session taking delegates through several new and innovative technological instruments which can be particularly useful in working with children and young people with special educational needs and/or disabilities (SEND).

Inspirational speakers
Speakers included pianist Nicholas McCarthy, who was born without a right hand and who talked inspiringly about the difficulties he has encountered and the inspiring teachers he has learned from on his way to becoming a successful concert pianist.

Julian Lloyd Webber, still one of Britain’s best-known performers even after his recent injury-enforced retirement, became Principal of Birmingham Conservatoire in 2015.
He spoke passionately about the need to support and fight for music education at a time when the place of music in schools – and that of cultural education in general – is threatened by initiatives such as the English Baccalaureate: ‘Children deserve the right to a music education. Music is worth making a noise about. We need to keep fighting.’

Instrumental teaching
Respected music teacher and author Paul Harris ran a packed-out session on how to get pupils to practice regularly, successfully and in a focused way, while also highlighting the important role for parents in encouraging pupils to work between lessons.

Elsewhere in the programme, Lucinda Mackworth-Young, course director of the European Piano Teachers Association’s teachers’ course, took delegates through the improvisation techniques and material from her recent book ‘Piano by Ear’.

There were also practical sessions from conference sponsors the Incorporated Society of Musicians, who took delegates through their latest data on setting tuition fees, and the Musicians’ Union, whose representatives took teachers through ‘All you need to know about building a private teaching practice’. Sally Cathcart, co-founder of the Curious Piano Teachers, presented a popular session on the ‘seven key principles for sight reading success’.

Several sessions covered the provision of instrumental lessons in schools. Peripatetic teachers are now expected to teach in groups ranging from three to thirty-three students. Although times are changing, most teachers still receive little – if any – training in mixed ability, large ensemble tuition; let alone any CPD.

These sessions included an update from NYMAZ on its innovative distance learning programme Conect:Resound – which uses Skype and other technologies to deliver instrument lessons to schools in rural locations where this might otherwise not be viable.

Vocal coach Mark de Lisser of Trinity College London, who worked on BBC2’s recent series ‘The Naked Choir’ and is a vocal coach on ‘The Voice’ ran a workshop on measuring assessment and progression through rock and pop teaching.

Teacher trainer Sue Cowley looked at ways of promoting creativity in group teaching and promoting positive behaviour in students. In addition to giving practical advice on maintaining focus and structure during group teaching sessions, Cowley urged teachers to help students silence their ‘internal editor,’ creating a supportive climate in which students are free to experiment and take creative risks.

Delegates also had the chance to take part in some whole class ensemble tuition themselves, forming the Expo’s first ‘Instant Orchestra’. In a session led by Lambeth Music Service, thirty enthusiastic delegates had just 45 minutes to learn three notes on an unfamiliar instrument and come together to form a simple piece. Aside from the clear enjoyment had by all, this session illustrated some of processes and principals behind Lambeth’s successful WCET programme and showed how teachers can achieve remarkable results in this challenging teaching environment.

Panel debates
Panel debates were held on a range of issues. One major lunchtime debate looked at the future of music GCSEs and A-levels in the face of the reinvigorated English Baccalaureate, with panel members Sam Cairns of the Cultural Learning Alliance, secondary teacher Hanh Doan of Beaumont School in St Albans, Thomas Lydon of Rhinegold Education and Deborah Annetts, chief executive of the Incorporated Society of Musicians, which runs the Bacc for the Future campaign.

Product launches
Several product launches took place at the Expo, including Playbook’ s Scalebook, an app that not only gives students instant feedback, but also records all their practice data – which teachers can then access via a cloud server to see exactly what has been practised and identify any areas of concern.

Also new at the Expo was Sightscribe, ‘the most powerful, engaging and effective app for the practice/instruction of melodic and rhythmic sight reading’, Stephen Marquiss’s Piano Portals, his newly developed, ‘effective and energising approach to piano technique’ which is grounded in a whole-body approach to playing technique which allows confident self-expression while also limiting the risk of injury.

The Incorporated Society of Musicians launched its new, freely available Teachers’ Pack, and Black Dress Code also launched, to provide ‘fashionable and affordable concert clothes for performing musicians around the world’, both young and old.

Back for 2017
All these music events ran alongside the new Musical Theatre and Drama Education Show, which proved a great addition to the Music Education Expo, not only in providing many opportunities for cross‑curricular sessions in the event programme, but also for networking, both between the performing arts teachers who attended, and also with the many cultural education businesses and institutions on the trade floor. With more visitors, a larger programme and a new venue, this event is looking forward to its fifth year with renewed vigour.