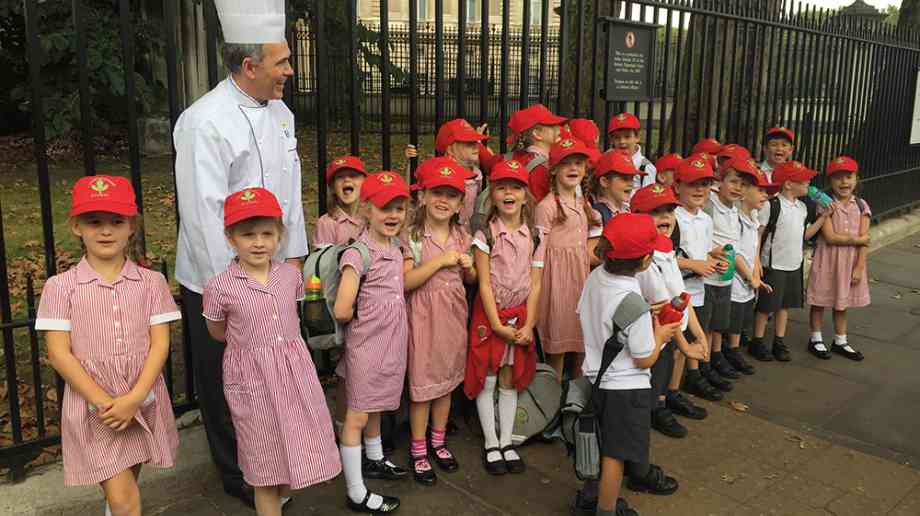 Schools get creative with British food

More schools than ever took part in British Food Fortnight during 17 September to 2 October, with competitions such as Cake for the Queen allowing pupils to get creative with local food.

The annual celebration of British Food Fortnight (17 September to 2 October) has again proved to be a tremendous success with more schools than ever taking part and with bigger and better visibility of British food and drink. Hundreds of events took place up and down the country with the Cake for the Queen competition the highlight of the campaign.

Chiddingstone Primary School in Kent was crowned winner of the Love British Food 2016 Cake for The Queen competition. Chosen from a total of 98 entries, Chiddingstone’s spectacular cake themed ‘The Queen’s 90th Garden Party at Buckingham Palace’, was made with home-grown carrots, Kentish apples and local eggs and honey. It won the school a special prize visit to Buckingham Palace in recognition of the incredible work put in by the students.

The Queen’s official 90th Birthday was celebrated on the weekend of the 11th and 12th June 2016 and Love British Food invited children to join in by holding a fun birthday party, the centre-piece of which had to be a special cake for Her Majesty. The competition set a specific challenge: as well as making a cake that was spectacular it had to be made with healthy ingredients – the healthier, the fresher and the more local the better.

Designs fit for a queen
From Scotland to Devon, and Wales to Norfolk, imaginations were set alight and mixing bowls kept busy as recipes were created, tasted and tweaked. Popular ingredients included beetroot, courgette, lemon and strawberries and some recipes replaced sugar with honey and fruit juices.

Decorating the cake proved particularly popular and designs included Corgi dogs, crowns, the Queens’ hats, plenty of Union flags and even a Landrover.

Megan Glover, teacher at Chiddingstone school, said: “Each week, we made different cakes using healthy and local ingredients which helped us come up with our final recipe. We researched the Queen’s history and one of our funniest lessons was looking into the ten most weird and wonderful gifts the Queen has been given. The children made miniature versions of these out of icing for our cake, including the elephant.

I’ve looked at all the other entries and they really are amazing. I can see how many hundreds of children have benefited from the competition and have no doubt that my class will remember this project for the rest of their lives.”

The runners up were Lumley Infant and Nursery School from County Durham who produced a Union Jack cupcake display where each of the children produced a drawing for the Queen, which was transferred onto edible paper and placed into home-made fondant frames. The frames were arranged in a Union Jack formation. The cake was shared locally but also ‘virtually’ with their friends in Uganda via a skype session.

Cathryn Higgs, food policy manager at The Co-op, official sponsors of British Food Fortnight 2016, said: “The range of styles, flavours and designs entered into the competition have been fantastic to see. They would rival even the best Co-op cake, and that’s saying something, definitely fit for a Queen.”

School activities
Hampshire Fare put in place a British Food Fortnight programme for Bentley School in Farnham, with involvement from a number of local suppliers including Riverford Organic Farms and the Cold Pressed Oil Company. Activities were wide ranging and were tailored for each school year starting with Reception Years (age 4-5) and up to Year 6 (age 10-11).

Reception Years did veg head-making and hunt the hog, while Year 1 took part in Riverford Veg talks and veg kebab making, as well as the Village Shop tastings. Year 2 did baking with Honesty Group and a session with Meadow Cottage Dairy. Year 3 took part in ‘The Yellow Fields’ Cold Pressed Oil production session plus tastings of Rapeseed oil. They also learnt all about bees and honey with BeeGood.

Year 4 did scarecrow making, with each scarecrow entered into a competition for Harvest Festival Winchester. Hampshire Charcuterie Parsonage Farm did blind tastings of Charcuterie made from their pigs along with teaching the parts of the pig.

Year 5 took part in Mill Farm burger making and a Mill Farm Beef production/organic talk. Year 6 visited Jenkyn Place vineyard and had a dairy talk and tastings by Lyburn Cheese along with a teach-in on organic veg.

Cucina competitions
Huge supporters of British Food Fortnight are Cucina Restaurants which organised the following activities at 44 secondary schools in the South East plus one in Manchester:

The Great British Grow Off involved receiving a pack containing courgette seeds, a diary and a sheet to tell them how to grow their seeds. The winning Courgette was made into a delicious meal at the school and showcased for all to taste, and the growers received a free lunch for themselves and a friend. Sponsored by Fresh Direct, there was a grand prize for the best courgette across all of the schools. This winner received an annual family Merlin pass.

The You’re the Chef project involved school‑wide recipe competitions where children submitted their own British recipes, with winning entries cooked for the school.

From September, a new after school programmes started for students, staff and parents educating on seasonal British ingredients and how to develop recipes.

‘Cucina Loves British Food’ involved the head chef’s favourite British dishes, which were put on recipe cards and rolled out across all restaurants, with one chef featured each day of the Fortnight.

A Great British Classics theme was featured on menus every thursday during september, with dishes developed by Masterchef the Professionals winner and Cucina development chef, Ash Mair.

Assurance schemes
For school caterers it is the ideal opportunity to work with local farmers, producers and suppliers of home grown foods. It’s a time to become familiar with assurance schemes and the standards by which they operate. Many of our regional food and drink producers are part of a scheme which sets out the standards they work within. More and more consumers want to know how their food is produced and where it comes from. Sourcing products that are part of these assurance schemes demonstrates the standard of food being used and that it is fully traceable. Such schemes include ‘Red Tractor’, which guarantees that the food and drink has been produced under strict standards covering food safety and animal welfare from the farm to the retailer and caterer.

‘RSPCA Assured’ indicates that the food has been produced according to the RSPCA’s standards. These are based on the Farm Animal Council’s ‘Five Freedoms’ and are applied to each stage of an animal’s life. Regular traceability checks are carried out on the whole production process from farm to shop to ensure that all involved in the production of Freedom Food labelled products has been approved by the scheme. The mark can be found on meat, poultry, salmon, dairy and egg products from farm animals.

The ‘LEAF Marque’ links environment and farming. It is found on fresh, seasonal fruit, vegetables, meat and even flower products. The Marque confirms that the food has been produced in an environmentally responsible and sustainable way, based on the holistic principles of Integrated Farm Management.