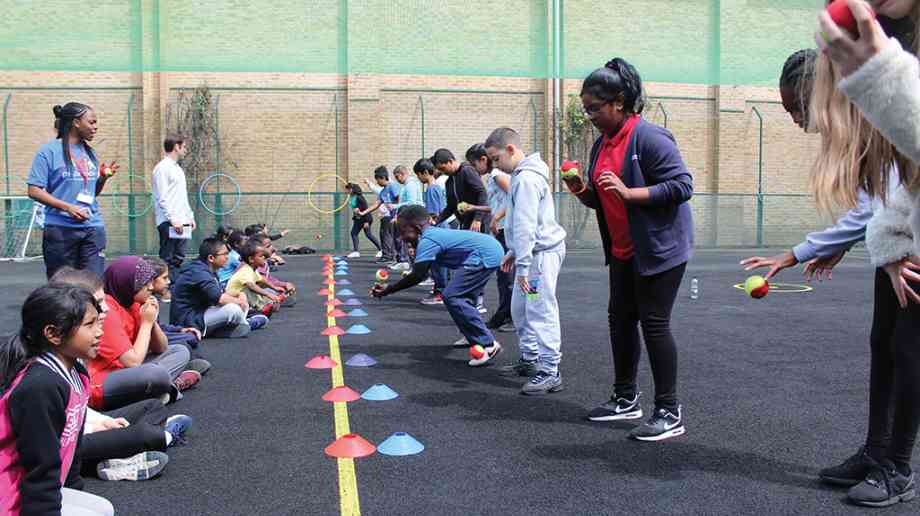 Physical activity is not just about sport

Schools need a fundamental culture change, shifting their focus away from sport and towards physical activity, writes Miranda Markham

Despite rising awareness of the benefits of exercise and healthy eating, childhood obesity is on the rise in the UK.

Today, nearly a third of children aged 2 to 15 are overweight or obese and younger generations are becoming obese at earlier ages and staying obese for longer.

It would be easy to assume that the solution is to add more opportunity for sport in school. Surely, if children became engaged with sport at an earlier age, we could easily curb this crisis.

However, experts agree that the emphasis on sport is overrated. Instead, schools need a fundamental culture change, shifting their focus away from sport and towards physical activity.

A SHIFT TO PHYSICIAL LITERACY

A shift to physical literacy Dean Horridge, founder and CEO of Fit for Sport, is a firm believer that adding more sport in schools isn’t going to address the actual problem. “I think we’ve got it wrong for many years,” he says. “In every class of 30, there’s only about 10 kids who are interested in sport.

What ends up happening is that the 10 kids that are naturally good at sport excel in these environments. They love the experience because they get passed the ball. Ultimately, they get to win.

“However, it’s the other 20 that miss engaging in these activities and we lose them. Not just as a child, but for life.”

Instead, Horridge suggests a shift toward “physical literacy,” that is, fundamental skills like how to catch, how to run and how to jump. “It’s about participation, not technique,” says Horridge. “All primary school kids want to do is have fun. When the focus is on technique, you alienate the 20 children who don’t have natural sports ability.”

According to a recent study by Fit for Sport, 79 per cent of children in the UK fell below the recommended fitness levels for their age group. What’s worse, children who disengage from sport at a young age often become physically inactive adults.

Launched earlier this year, programmes like Fit for Sport’s Healthy Active Schools System (HASS) are aiming to combat this problem. HASS is a free online activity measurement tool for schools which allows them to track, measure, monitor and evaluate children’s fitness and activity levels.

It can also help schools, regardless of how affluent they are, support children who are not very fit or active.

Another associated benefit is that active schools can reduce incident/accident rates by as much as 78 per cent.

Lunch time provides the perfect opportunity for a marked increase in physical activity. Horridge says there is a need for more trained and upskilled staff to not only facilitate but join in with lunch time activity. “When teachers get involved, it has a massive impact on children’s activity,” he says.

“Something as simple as getting a tracksuit on and getting involved in a game of dodgeball can make a big difference.”

Ultimately, he says “adding more sport in schools is not the answer.”

“Putting more money into sport and PE doesn’t actually address the problem. The focus needs to be on getting kids active in a fun way. If we make having fun and being active the same thing, children are so much more likely to consider sport later in life.”

While she acknowledges that the state of PE and sport in school is improving, there is still a major participation issue, especially with young girls who typically hate PE.

“In addition to sport, it would be beneficial for schools to incorporate more regular movement into the day,” says Linda. “It would be great to add something for everyone, especially some options for physical activity that are not competitive.”

Hall says that, when children are in primary school, a lot of them lose interest because of competition. However, a programme like Animal Fu is focused on participation and is designed to be accessible to all children, regardless of gender, size or ability. “You can be big, small, tall, short, a boy or a girl – Animal Fu is accessible to any child,” she says.

Designed to complement existing school sports and activity offerings, Animal Fu centres around five different animal characters, all with a different message like healthy eating, no bullying, respect and self-belief.

“The movements are borrowed from Tai Chi and other martial arts forms,” says Linda. “Some children struggle with basic movements but with the slow, controlled movements of Tai Chi, everyone can do it.

Also, because it is fun, and based around animal characters, children don’t recognise the activity as exercise. All children love animals so when they lunge, they don’t know they are lunging. They are doing tiger crawls.”

Linda maintains that a programme like Animal Fu can work hand-in-hand with existing sports programmes, like swimming or tennis because the movements they learn in Animal Fu help improve balance, arm swing and body awareness.

Beyond sport and physical activity, Linda suggests that more schools focus around “wellness activities,” that is, activities that help children have fun and feel good. With elements of mindfulness incorporated into the programme, Animal Fu can not only help children become more physically active, but also be beneficial to children’s mental health as well.

ARE GIRLS AT RISK MORE THAN BOYS

Duncan Jefford, regional director for Everyone Active, says there is a major disparity between what girls are offered and what boys are offered in terms of sport in school.

“In sport, it is still a very sexist culture. It’s time to break that cycle,” he says.
A recent study from Youth Sport Trust and Women in Sport revealed that secondary school aged boys (age 11-16) are happier with the amount of physical activity they take part in and enjoy it more than girls (71 per cent of boys vs. 56 per cent of girls).

Even more troubling is that 45 per cent of girls do not see the relevance of the skills they learn in PE to their lives and ultimately, issues with confidence, self‑consciousness, the pressure of academic school work and lack of encouragement from teachers and parents, all hold teenage girls back from being physically active.

With two young girls of his own, Jefford described the state of sport in school as “incredibly disappointing,” particularly in the state sector.

To help address this issue, Jefford said Everyone Active is now delivering a variety of programmes to help schools make sport more affordable and accessible.

“We have partnered with Great Britain Olympic gold medallist Alex Danson to launch a hockey academy for children aged 7-11 and we’ve also teamed up with the Hertfordshire Mavericks to launch a series of netball camps. Both initiatives allow us to get girls involved in these sports at a much younger age than what is typically offered in school,” says Jefford.

Both programmes have ambitious goals. The Alex Danson Hockey Academy aims to engage 10,000 children with hockey over the next three years, notably young girls who are not traditionally offered this opportunity until Year 5. Similarly, the Hertfordshire Mavericks partnership wants to get an additional 20,000 girls and women partaking in some form of netball-related activity over the next three years. “If you get children more active in primary school, you embed good habits for life,” says Jefford.

Swimming is another area where some state sector schools struggle. “Unfortunately, the reality is that nearly 2,000 primary schools in the UK do not offer any swimming lessons and there’s over a quarter of a million children every year that finish primary school and can’t swim 25 meters.”

As a result, Jefford said that Everyone Active is allowing access to swimming lessons at a more affordable rate to help break down the price barrier facing many British schools.

One issue facing schools is the cost of transport for children from school to a leisure centre with a pool, so Jefford said Everyone Active is working with coach companies to find ways to make transportation more affordable.

“Our aim is to enable every child to swim 25 meters by age 11,” says Jefford.

While sport and PE is an important part of most children’s school experience, the reality is that most children do not meet the recommended minimum requirements of weekly physical activity.

Worse still is that many children, especially girls, lose interests in sport at a young age which often has major consequences in their adult‑life.

Unfortunately, the school environment naturally promotes a very sedentary culture: children are required to sit for long periods, walk instead of run and be still for most of the day.

With childhood obesity levels on the rise, increased physical activity is needed more than ever. Shifting the focus away from sport and toward more regular activity that is both accessible and fun will undoubtedly have a lasting impact on the health and wellbeing of today’s children, now and until adulthood.