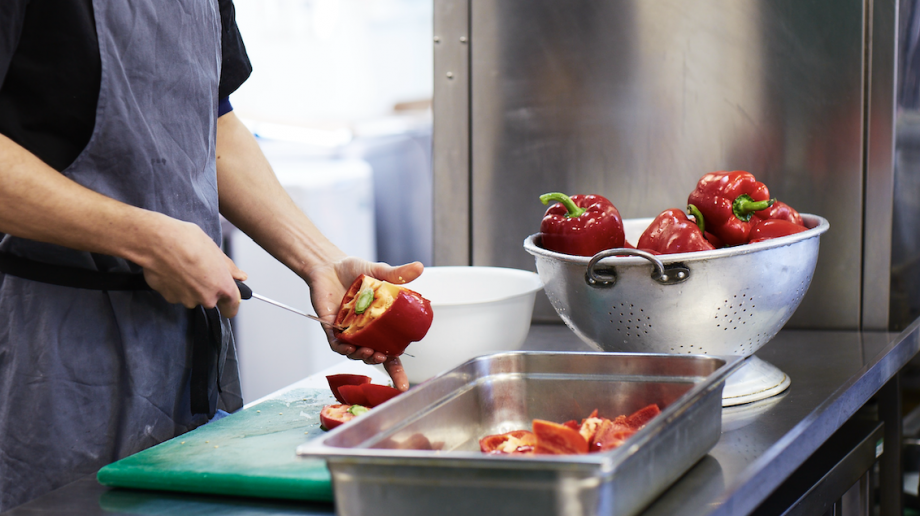 How to improve school lunches

If you empower your kitchen teams to make food from scratch, you will soon have happier staff and pupils. Chefs in Schools – a charity working to transform school food and food education – explains how this can be achieved

Written by Danielle Glavin, head of communications at Chefs in Schools.

Fish Friday for forty London schools begins around shipwrecks off the South West coast, where small fishing boats are catching pollock using rods and lines. That fish is packaged up by Brixham Seafish and whizzed up the motorway to school kitchens. There, the teams fillet, bread and bake it, serving it alongside school-made chips, salad and freshly minted peas. The Fish Friday lunches are low in salt and sugar, yet high in nutrients – and they don’t break the bank. Plus, the kids love it. But rewind a few years and it was a very different story at these schools. The fish arrived frozen, it was poor quality, mass-produced and bunged into the oven to heat up. The same could be said of the chips and peas. So, what changed?

Those schools all decided better is possible when it comes to school food. They now train their kitchen teams to make all food from scratch. They pay a living wage. And it doesn’t have to cost any more money. This way of working can be replicated across the country.

The first school, from the forty above, that started changing their food, was Gayhurst Community School, part of the LEAP Federation of state schools in Hackney. Louise Nichols, the exec head, recruited Nicole Pisani, head chef at a top London restaurant, to run the school kitchen.

Louise’s motivation was to serve up good, nutritious food, but she found the benefits went further than that.

Louise says: “Nicole brought passion, commitment and a real desire to share her skills and demonstrate how great food can be.

“Five years on, the school is thriving, academic performance is some of the highest in the country, attendance is great, behaviour brilliant and the school is 200 per cent over subscribed with parents very keen to get their children in. I don’t know how much of all that the food has contributed to; it is hard to quantify, but the boost to the school community’s esteem in so many ways is palpable.”

Nicole’s expertise at making the most out of produce allowed Gayhurst to save money and reinvest in continual training of the kitchen team. They now make bread from scratch, prepare all sauces and meals in house, and source the freshest of fish from Brixham.

Food education improved too. Nicole started teaching pupils how to make soda bread, how to butcher chickens and make soups and sauces.

Things went so well at Gayhurst, that the idea for a charity, Chefs in Schools, was born. The charity – led by Nicole, Louise and Henry Dimbleby, author of the National Food Strategy – is working with schools across London and branching out further afield.

Nicole says: “Our aim is to challenge the perception that poor school food is acceptable because it isn’t possible to do better with the budget available. We’re showing that it’s possible to educate and nourish young children – school food can be innovative and exciting.”

A recent survey from Chefs in Schools showed record satisfaction levels with the kitchen teams working to its ethos: 96 per cent of chefs reported feeling satisfied or very satisfied in their job; 92 per cent had experienced a shift in food culture within their school; and 100 per cent of chefs would recommend working in a school kitchen to a friend.

The chefs were proud to be ‘making a difference’ and ‘able to help develop the next generation of foodies’.

In contrast, research by Unison indicates the wider school kitchen workforce often feel undervalued and excluded as a member of the wider school team. They also expressed concerns around workload, pay and job security.

Chefs in Schools is developing a qualification and online training that will help all schools ensure their kitchen teams have basic nutritional knowledge and the latest tips and tricks on making healthier choices more appealing to students.

The charity also works hands-on with schools, training teams in person. And, in collaboration with the LEAP Federation, they’ve opened the Hackney School of Food.

One school that’s working with Chefs in Schools to raise the bar in school food, is Woodmansterne, a state school in London. The Head Chefs cook for primary and secondary aged pupils. They also offer education – they’ve introduced a koji fermentation lab which is used in science and food education classes. And they’ve enlisted famous chefs to guest chefs for the day and hold Q&As with pupils.

Nicole says: “This demonstrates to us the importance of having people in a school kitchen who love food and want to pass that passion on. Food builds relationships, confidence and can offer a rewarding career – where better to sow the seeds for all of this than in schools?”

If this is whetting your appetite for change – where do you begin? Firstly, you have to value your school kitchen team. On inset days, they should receive training. Not just the legal requirements, but craft skills and professional development. They should be mentioned in comms to parents, and they should feel part of the school community.

It’s also key to recognise how food served in the dining hall, or taught about in the classroom, can be linked to health and educational opportunities for children.

Harrington Hill and Grasmere Primary Schools started putting food at the heart of the school back in 2019.

Head teacher, Nick Mallender, says: “Our head chef, James, splits his time between both schools, overseeing and training the different kitchen teams. We’ve been blown away by the difference it makes at the school. Children are excited to be eating lunch much more than they were, they’re asking about it and interested in the food. The number of teachers who have school dinners has shot up. They’re eating with the kids in the hall, talking with them. We want to build on that and make mealtime a real focus of the day.”

What are the next steps?

The Chefs in Schools’ model of producing meals from fresh produce requires both skilled staff and sufficient workforce to prepare everything from raw ingredients.

Sit down and eat the food. Be honest, what’s good, what’s not, would you pay to eat it?

Then an audit is needed. Assessing the existing kitchen team and identifying any gaps in skills or staffing are crucial.

Naomi Duncan, chief executive at Chefs in Schools, says: “We need to all realise how important the job of a school chef or cook is. This is a workforce that not only feeds children every day, but also has the opportunity to shape their life-long relationship with food.
“If you empower your kitchen teams to make food from scratch, you will soon have happier staff and pupils. School-made food will always taste better than something taken out of the freezer.”

The process does take time and effort, but for Louise Nichols, at Gayhurst, Mandeville and Kingsmead it’s been worth it.

“I’m incredibly proud of all the kitchen teams at LEAP who’ve helped transform the food. They have had to keep the faith with the changes. I hope they would all say that they’ve now enjoyed the journey as they are very much a part of the whole school community and their cooking skills are far more appreciated than they were.”