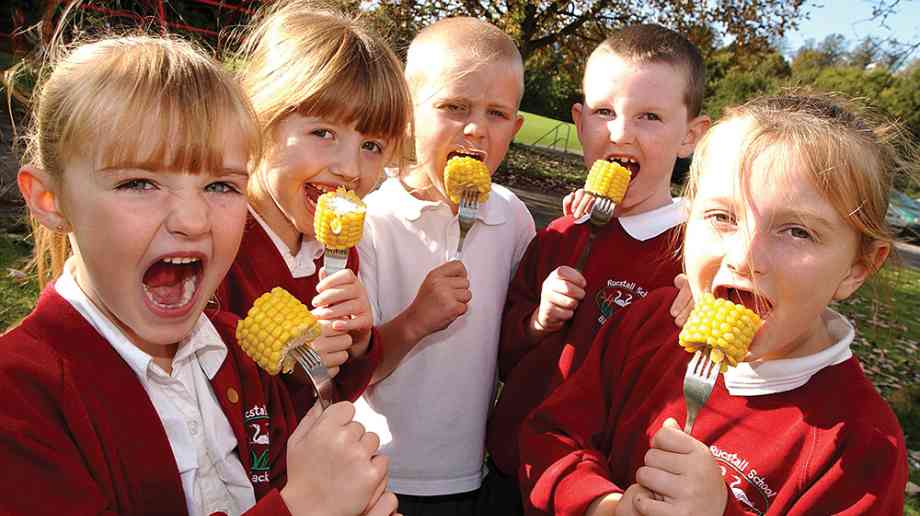 Get inspired during British Food Fortnight

With British Food Fortnight upon us (17 September to 2 October), how can school caterers and teachers get children excited about the wonderful food produced in this country?

School caterers
All caterers are invited to take part in British Food Fortnight and the patriotic summer of 2016 is the perfect chance to get children excited about the wonderful food we produce in this country. There are so many fun and imaginative activities that can be organised to link with the British message:

For example, you could organise a special menu for British Food Fortnight and expand the range of regional food that you use. Rather than just use the term ‘local’, add interest by naming and profiling the producers and farms. If you are unable to specify producers or farms by name then use generic phrases such as ‘All the meat sold comes from within 30 miles of this shop’. It’s a good idea to communicate menus in advance, and use a competition or prize draw to highlight the menu. Ensure the whole team knows about the local or British products and suppliers and encourage them to communicate this to pupils while serving food. Caterers could also serve a ‘Chef’s Special’ – perhaps a traditional British dish every day during the Fortnight.

School caterers are also encouraged to look at existing suppliers. This is an opportunity to promote your British and local suppliers. Just because you know that the food and drink you stock is British, don’t assume that your school customers do, so make this your opportunity to tell people about it – highlight British food on menus and boards using a Union Jack logo.

Organise a special event
School caterers could invite producers into their canteen and organise tastings of new or existing products – although a different sector, retailers report that sales of products offered for tasting double when the producer is in-store.

Schools could create a mini farmers market in the canteen with local suppliers and producers. Another idea is to organise a talk about local food, involving local producers. Parents should be invited to the event so they can see what you do. Lastly, you could create a display of British food and drink in a prominent place such as a window or entrance, so that children and parents can see the British products available when they walk in. A display is also a useful draw for the media as it creates a talking point and is easily photographed.

Working with teachers & parents
As a school caterer you are in the perfect position to be proactive in educating young people about British food. Schools must now incorporate cookery and food-related topics into their curriculum and are advised to seek help from local caterers and chefs to achieve this.

Give a cooking demonstration or lesson in your school: seek ideas from the many examples of how chefs have worked with schools in our document ‘Advice for Cooks & Chefs: Things to consider when working in schools’ for tips on facilities, dishes to teach, planning and giving the session.

Offer your kitchen facilities to a class for a cooking lesson. If you are worried about letting children loose in your kitchen, host a cooking demonstration rather than a lesson.

Ask your regular suppliers to donate ingredients for the cooking session: this is a good way for your suppliers to share in the publicity you will receive.

Make the dinner hall a venue where children can learn about food: set them a ‘British Food: True or False Quiz’ or give them fact sheets about some of the traditional dishes on your menu.

Cucina Restaurants
Cucina Restaurants feeds over 60,000 British state school students every school day, providing them with around 50 fine food meal choices at lunchtime and a range of before-school and after-school refreshments. Founder Steve Quinn’s vision is to show the world just how good school food could be, when teams worked hard with that objective as their main focus. The company install a high calibre hotel or restaurant chef to run every one of the 47 Cucina kitchens in schools across the South East of England.

Top chef Phil Howard will lead the Cucina British Food Fortnight effort by judging the successful ‘You’re the Chef’ competition, where school children will be invited to develop their own British recipes. A brand new after school programme will help students, staff and parents learn how to produce recipes and provide inspiration on seasonal British ingredients to put in them.

Phil will be joined this year by UK MasterChef The Professionals 2011 winner Ash Mair who is developing special dishes for British theme days to be held across all Cucina sites during the Fortnight. The school restaurants will also be throwing open their doors to the public for bistro style British evenings, giving students experience of running a catering operation.