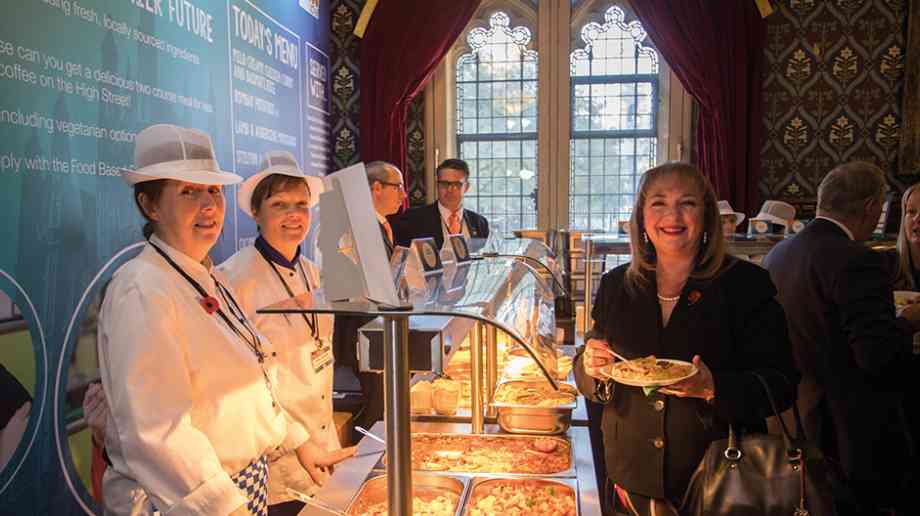 National School Meals Week took place from 31 October to 4 November and saw school caterers serve at high-profile venues such as the Palace of Westminster and the building of the Welsh Assembly to showcase everything that is great about the modern school meal.

A focus on nutrition and many years of service improvements have made school lunches the best they have been in years. And whilst we all recognise there is room for continuous improvement, school lunches are now something to be celebrated. National School Meals Week (NSMW) is an annual event that does just that; it showcases to the outside world just how great school food is, and how skilled and hardworking many school cooks are.

One of the aims of this year’s NSMW, which took place from 31 October to 4 November, was for school caterers to serve school meals in high profile venues to bring attention to the school food industry. As part of this LACA held an event at the Palace of Westminster which saw MPs enjoy a school meal from a menu that included mild creamy chicken curry, bombay potatoes, a lamb & aubergine moussaka, stilton and broccoli flan, vegetable stuffed burritos, as well as a salad bar and homemade bread. For dessert there was chocolate cherry potato cake, cucumber and lemon sponge pudding, Moroccan date pudding and fruit carvings.

School Chef of the Year winners Kath Breckon, Kate Davies and Tanya Watkins dished up lunch to MPs such as Sharon Hodgson, Roberta Blackman-Woods and Lord Blunkett, while pupils from Calverton Primary School in Newham handed out ‘I am a school meals supporter’ stickers.

Commenting on the event, LACA chair Sally Shadrack, said: “I think what’s been important about today is being able to meet MPs face to face and having the chance to talk about what’s great about school meals.”

The event was sponsored by Lesley Griffiths AM for Wrexham and was supported by many members of the Welsh Assembly, including the Leader of the House and Chief Whip, the Minister for Social Services and Public Health and the Cabinet Secretary for the Environment and Local Affairs. The Welsh Government’s Food in Schools Policy Officer, Charlotte Maurer, also attended and is looking to forge closer links with the LACA Wales committee as a result.

What’s more, the event was open to the public and had over 300 members through the doors to enjoy the excellent food on offer, and a 24-page recipe book was produced showcasing the very best of Welsh School Food.

Host a School Chef
National School Meal’s week also featured the ‘Host a School Chef’ initiative where school chefs are invited to spend a day in a different environment, such as a Michelin star restaurant, a sports stadium, or a 5* hotel. This allows the wider food industry, as well as the public and press to see school caterers show off their skills. Michelin-starred chef Glynn Purnell invited school chef Chrissy Jackson from Cityserve – the firm that manages Birmingham City Council’s school catering – to come and work with him at his signature Purnell’s Restaurant.

Glynn, who has a new series, the Secret Chef, starting on ITV in early 2017, is also a celebrated author and gave Chrissy signed copies of his two most recent publications ‘Cracking Yolks and Pig Tales’ and ‘Rib Ticklers and Choux Ins’.

Glynn Purnell said: “School caterers do a terrific job that often goes unheralded; there are few more important things in life, than making sure that our children are being well fed and nourished daily. The thousands of people that work in the school meals industry do just that every day of the school year and you have to be able to handle the pressure of preparing, cooking and serving, in many cases, hundreds of covers in a very short space of time. I am delighted to be involved and make a contribution to the celebrations”.

Cooking up a storm
Continuing the NSMW celebrations, school cook Theresa O’Toole from Polam Hall School in Darlington spent a day in the kitchens of Yorebridge House Hotel, a five star, three AA Rosette hotel restaurant in the heart of the Yorkshire Dales.

Working alongside Sous Chef James Wilson, Theresa O’Toole gained valuable practical experience of working in a high pressure kitchen environment and picked up a few tips to take back to school with her. The kitchen swap was organised by Simon Liversedge, Newcastle & Durham area manager for apprenticeship provider HIT Training.

Talking about the experience, Theresa said: “It was a fantastic opportunity to learn about really high-end food preparation and service, and to experience all that goes on behind the scenes in a busy, successful commercial kitchen. Although there’s obviously a big difference in the types of dishes we each serve on a day to day basis, there were still a number of similarities in kitchen disciplines and methods of working, and it was really interesting to experience these and learn so much from our fantastic mentors.”

Sophie Egglestone the general manager at Yorebridge said: “School lunches are such a great way to help with the healthy development of children, and I just hope the hints, tips and advice that James gave Theresa during the day can benefit the children at Polam Hall.”

Pupils at West Earlham Infant and Junior School in Norwich enjoyed a visit from Richard Bainbridge, who runs Benedict’s restaurant and was a winner on the BBC’s Great British Menu. The chef helped prepare a roast beef dinner and designed an apple crumble especially for the occasion.

Changing negative perceptions
NSMW continues to play a pivotal role in promoting the many positive aspects of the school food industry and debunk any negative views of school meals.

NSMW provides free marketing materials to help schools get involved. Materials included popular favourites and new ideas, such as the Spaghetti Challenge and the Great School Lunch Bake Off.

NSMW also encourages schools and to sign up of the NSMW Ambassadors’ scheme,to register their support for the school meals, and to get caterers to ‘shout out’ about all the great things they are doing, via the press or social media.

Quarter of secondary pupils to be in school at one time

DfE guidance says secondary schools should aim to practise social distancing, including keeping pupils two metres apart from each other.