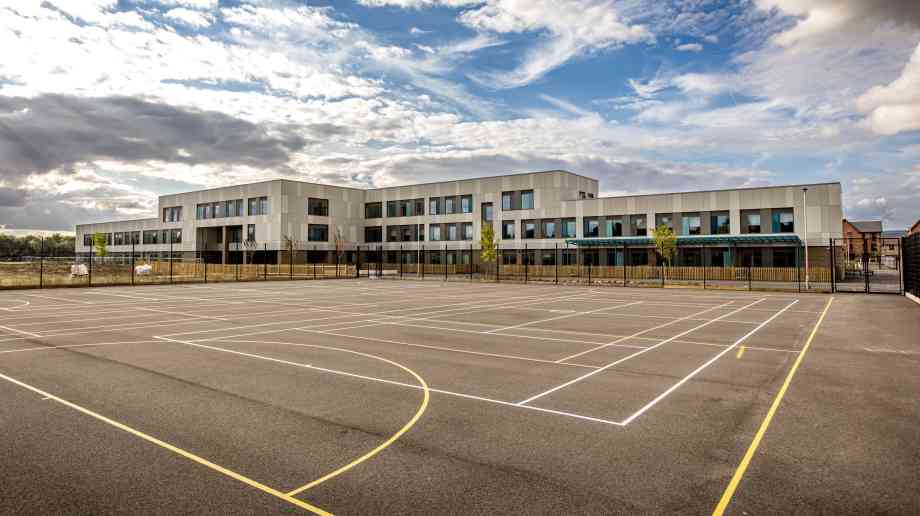 Glebe Farm School is Milton Keynes’ first fossil-free new build school. It’s so ‘green’ that it’s been removed from the grid and even its Bunsen burners are powered without gas. The school’s headteacher, Matthew Shotton, explains the project

At the start of this school year, Glebe Farm School, part of the Inspiring Futures through Learning (IFtL) multi-academy trust, opened its doors to 250 children and this will eventually rise to over 1,530 pupils. As an all-through school, children can enter at reception and stay all the way through to Year 11. There is also a 39-place full-time equivalent nursery.

Nothing new in that, you might be thinking – new schools or new school buildings are opening all the time – but our school is Milton Keynes’ first fossil-free new build school, funded and developed by Milton Keynes City Council with building works carried out by the Northern Home Counties team at Morgan Sindall Construction.

The driver has been Milton Keynes City Council which, since 2015, has opened six new schools and expanded 22 others, creating thousands of new local school places. The council is well on track, as part of its MK Futures 2050 strategy, to be carbon neutral by 2030 and carbon negative by 2050 and in each case, planners, architects and builders have aimed to have a positive impact on the environment by using clever designs and greener technologies.

The whole site has been designed to have a minimal impact on the environment. Glebe Farm School is ‘gas free’, with air source heat pumps (ASHPs) which absorb heat from the outside air providing all the energy needed for air and hot water. All lighting comes from ultra-efficient LEDs whilst hundreds of solar panels generate power for the building. Furthermore, 840 trees, donated by the Woodland Trust, have been planted on the grounds.

Working together on the vision
One of the exciting features of this project was the close collaboration from day one of the design and build project between Milton Keynes City Council as the commissioners of the school, IFtL as the appointed multi-academy trust to run the school, and the developers the Northern Home Counties business at Morgan Sindall Construction. Together they created the vision for a fully integrated all-through school (under one roof) whilst considering how the sustainable credentials would be maximised during the build and throughout its operation as a school for years to come.

With construction of the school having started in February 2020, many of the recommended green building processes were immediately underway, reducing any impacts on the local environment. One of the most significant ways emissions were minimised during the build is by using alternative and renewable power sources for the equipment and temporary set-up.

This was accomplished by using a solar powered generator, powered through 32 photovoltaic (PV) panels, to provide clean, off-grid energy for the site’s cabins, canteen, toilets and even the CCTV system. Through embracing new technology, Morgan Sindall Construction used five solar-powered, wireless CCTV cameras around the site.

For those less sunny days, the generator used bio-fuel Hydrotreated Vegetable Oil (HVO) instead of diesel to make sure that the work kept going without any disruptions, whilst also emitting 90 per cent less. Even when not on solar power, this was still a much more sustainable energy source for the team onsite, as HVO only creates 0.195kg of CO2 instead of the 2.68kg created when burning red diesel. A solar-powered PV boot wash and electric charging car parking spaces were also installed for staff.

Removal from the gas grid
One of the most significant eco-friendly design changes came with the decision to remove the school from the gas grid, with all the heating to be provided instead by renewable energy via roof mounted ASHPs. The emission reducing effectiveness of this move was highlighted by the Committee on Climate Change, which stated that carbon emissions for a home can be up to 90 per cent lower for a house and 80 per cent lower for a naturally ventilated office when using ASHPs instead of gas.

Unlike most developments, this decision has an interesting knock-on effect for a school, as typically every science lab will require gas-powered Bunsen burners. To solve this issue, Milton Keynes City Council installed electric Bunsen burners instead, so that no part of the building would require a gas connection for any reason.

This is a good example of how this project is ahead of the curve, as gas Bunsen burners are still routinely specified for new schools despite the construction industry veering away from this fossil fuel. The move to drop gas is especially evident in the recent Future Homes Standard and its directive to take new homes off the gas grid – a direction that is likely to be keenly felt in public sector construction in the coming years.

Integrating underfloor heating (UFH) into the school’s ground floor slab provided an energy efficient heating method while saving time when compared to using a sand and cement screed. The manner in which UFH heats an entire space from the ground up means that heat is used in a more efficient manner compared to traditional methods such as radiators.

The building in operation
The green design changes did not stop at construction, and in operation renewable power became an ever more prominent part of the project, with the number of solar panels increasing and with six electric charging points added to the car park. When it came to the components used to construct the school, the Green Guide for building materials was consulted to inform sustainable specification choices, which included choosing eco-friendly PVC-free hoarding instead of a traditional option. 360 metres of carbon neutral hoarding was installed around the site, saving 12 tons of carbon.

The Morgan Sindall Construction Northern Home Counties business worked closely with Milton Keynes City Council and IFtL to ensure that the school’s design would continue to effectively minimise emissions during its day-to-day use. A key way this has been achieved is by designing a building envelope with very low air permeability to retain heat and reduce the energy required to warm the classrooms. While regulations state that schools should meet an air leakage rate of 5m3/hm2, the school benefits from a much better air permeability rate of only 3m3/hm2..

Externally, the school’s grounds were made to be green in more ways than one. Not only will 840 saplings donated by the Woodland Trust be planted, but all the mulch and topsoil will be reused instead of being moved, saving the emissions that would otherwise be incurred through transportation. The levels of the school’s ground were carefully redesigned and raised to accommodate this additional material. In operation, this now saves 40 tons of CO2 each year.

The heart of the community
Beyond the design of the building and its eco-features, the school is a huge leap forward educationally. Underpinned by our strong values of Integrity, Responsibility, Endeavour, Bravery and Empathy, our school will be the ‘beating heart’ of a new and developing community. Serving children and young people from the immediate residential area and nearby towns and villages, we will offer unrivalled curriculum and enhancement opportunities, enabling pupils and students from all backgrounds to pursue their interests and fulfil their potential. As a centre of innovation, equipped with the latest education technology including 1:1 devices, and a commitment to outstanding pastoral support, our school will give every learner the tools needed to be successful in the ever-evolving and challenging modern world.

As David Rowsell, area director for Morgan Sindall Construction in the Northern Home Counties, summarised himself for this article: “This project is a great showcase for how to rapidly create a high-end educational environment that is not just at the cutting edge of sustainable design but which has been delivering tangible social benefits to the local community at every stage of its development. Thanks to this combination of factors, the local area has a significantly increased student capacity and the school’s pupils will go through their educational journey in Milton Keynes’ first fossil-free school.”