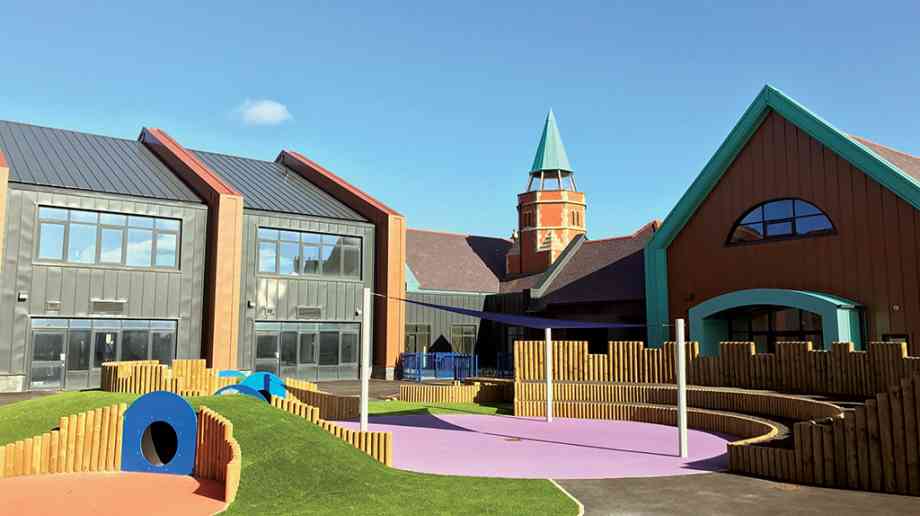 The Welsh Government has announced £2.3 billion for a second phase of its school building investment programme. Education Business looks at what the programme has achieved and how the new money will be spent

The Welsh government has announced a further £2.3 billion to continue its long-term capital investment programme for Welsh school buildings.

The first wave of investment for the Century Schools and Education Programme, which concludes in 2019, focuses on reducing the poor condition of school buildings and providing pupil places where needed.

The second wave of investment, Band B, will comprise two funding streams; one using traditional capital and one using revenue funding via a new form of Public Private Partnership called the Mutual Investment Model (MIM).

The school projects proposed in the second round of the programme must meet the objectives of Band B. These include addressing growth in demand for Welsh medium education, reducing surplus capacity and inefficiency in the system, and expanding schools and colleges in areas of increased demand for educational services.

Other objectives include addressing the condition of educational assets and making assets available for community use where demand exists, to optimise the infrastructure and resources for public services.

The 21st Century School and Education Programme represents the largest infrastructure investment in Welsh schools and colleges since the 1960s, and is being delivered in partnership with the Welsh government and its key stakeholders.

It will make sure that funding resources are focused on the right schools and colleges in the right places, for early years through to post-16.

The first phase, which continues until March 2019, focuses on reducing the poor condition of school buildings and providing pupil places where needed by reducing surplus capacity, and addressing specific Welsh medium and Faith based provision needs.

The first phase aims to rebuild and refurbish of over 150 schools and colleges.

A new £22m Coleg y Cymoedd campus in Aberdare was built with £11m from the 21st Century Schools and Education programme.

Built by construction contractors Kier, the 600-student campus is made from a steel frame structure with a four storey and three storey block linked by an atrium. It also comprises the refurbishment of the old existing railway building as well as parking facilities.

The new college has additional teaching spaces, workshops and student facilities to replace those on the existing campus.

As well as offering courses in more traditional subjects such as computing and science, Coleg y Cymoedd offers practical courses including bricklaying, carpentry and joinery, electrical installation and plumbing that are designed to meet the demands of local employers.

First Minister of Wales, Carwyn Jones, said: “This new college provides students with an impressive learning environment and the very best resources to help them reach their full potential. As well as benefitting teachers and students, the college will be an invaluable community resource for the people of Aberdare to use and enjoy.”

Ysgol Cybi is a new 540-place Welsh medium primary school in Holyhead which was delivered by £9.7 million of Band A funding.

It was built opposite the existing Ysgol Uwchradd Caergybi secondary school and involved remodeling the Grade II listed frontage as well as a new two-storey extension.

Pupils benefit from the latest facilities and resources to include modern and well equipped classrooms and suitable outdoor areas for play and learning.

The school was designed and built by Wynne Construction and is one of the first in North Wales to adopt Building Information Modelling (BIM) to the full level 2 standard. This allowed designers and constructors to work collaboratively to streamline and accurately model a construction project before work started on site.

The school is also constructed to BREEAM Excellent standards for its sustainable building design, construction and operation.
Gareth Thomas from Anglesey Council said: “The New Ysgol Cybi Primary School Project has been the first BIM project for the authority. We’ve delivered an excellent collaborative working and project delivery solution on the first of many 21st Century Schools projects.

It’s rewarding to see that pupils, parents and teachers alike are so delighted with their new building and resources.”

Welsh education secretary Kirsty Williams attended the opening of Ysgol Cybi. Speaking about the Century Schools and Education Programme, she said: “I am committed to raising standards, reducing the attainment gap and delivering an education system from the ground up that is a source of national pride and confidence.

“The 21st Century Schools and Education Programme is one of the means to achieve this ambition and represents the largest investment in our schools and colleges since the 1960s.

“The first wave of funding provided though the Programme will see investment of more than £1.4 billion over the five year period ending 2019, supporting the rebuild and refurbishment of more than 150 schools and colleges across the Wales.

“This is why I am delighted to announce a second wave of investment for the Programme, which will begin in April 2019.

“We will work closely with our partners to agree the pace of delivery and put in place investment plans that are affordable and meet our shared ambition to create sustainable learning environments that meet the needs of our communities.”

Announcements on individual Band B projects will be made in conjunction with local authorities in due course.