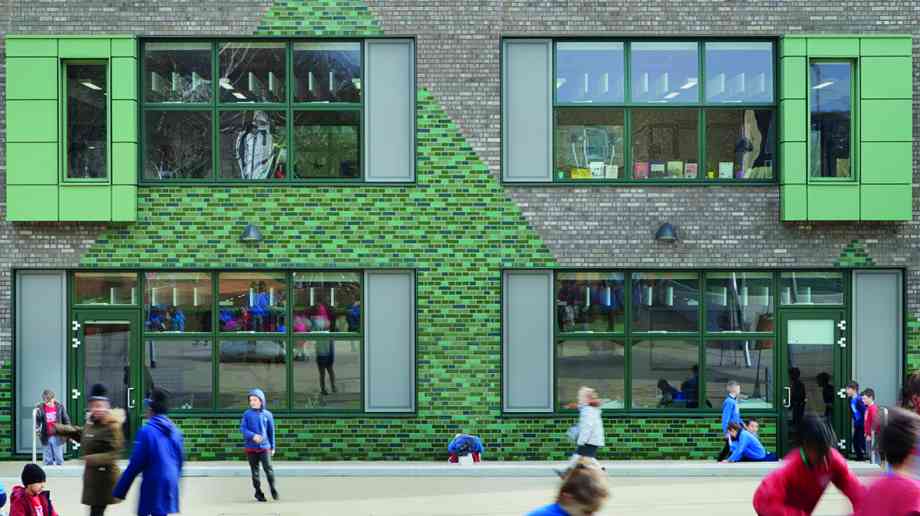 The regional RIBA Awards celebrate architectual brilliance across the UK, and in London this year, several schools scooped the coveted title for their outstanding school buildings

The regional awards from the Royal Institute of British Architects (RIBA) champion and celebrate the best architecture in around the UK, no matter the form, size or budget. Successful projects at their core display a commitment to designing and developing buildings and spaces for the improvement and enhancement of people’s lives.

This year’s regional awards have been announced, and in London, several schools were presented with a RIBA award.

Belvue School’s new Woodland Classrooms by Studio Weave scooped a RIBA London Award for its buildings that act as a ‘retreat’ for pupils.

Belvue School is a secondary school for those with severe learning difficulties and a range of other needs. The school sits in a small patch of modest nature, and whilst not luxurious, represents a glimpse of nature with which the pupils, who mainly live in blocks of flats nearby, were otherwise unfamiliar.

The school was to be allocated two Portakabins to meet its need for more space but the head-teacher decided that a much more imaginative solution could be found. As such, she raised the money for the building independently and so the design direction was under her control. Her brief was to create 150 square metres of extra curriculum space, with a domestic quality and intimate scale. Studio Weave developed a collective narrative with the pupils, to open up imaginative ways of engaging with the outside.

A central open, covered space frames the wood and the building has a tent-like outdoor quality. Either side are two rooms: one cosy with a wood burning stove, the other fitted out as a kitchen and dining area to help students develop independent living skills.

The building has an exposed timber frame, and is lined in birch plywood. The roof is an extremely elegant series of three formed roofs, with clerestory lights, that illuminate its very beautiful profile, while also allowing a straightforward stack effect for natural ventilation.

There are shelves for things students have made, cosy corners and student-made tiles as a splash-back to the sink. Every effort was made to involve the students.

This building is naturally ventilated, thoughtfully orientated to maximise sunlight and avoid overheating, fully wheelchair accessible and all the timber is from reliably renewable sources. It acts as a retreat where students can go to connect with nature and be themselves.

By architects Maccreanor Lavington, the four main aspects of the project were a generous new hall against the site boundary, the ‘lost’ playground elevated to first floor above the new hall, a reconfigured entrance to provide level street access and the refurbishment of the existing school building providing new classrooms, resource spaces and WCs.

The school now has a welcoming and clear entrance with space for parents to sit and talk to one another as they wait to pick up their children.

The new hall is a large versatile space which can be divided into two separate spaces. Heating in the hall is on the ceiling so no floor space is lost.

The playground above feels safe and fun and contains two sheltered canopies. High mesh fencing surrounds the playground to prevent balls and other toys leaving the space. The mesh changes density to prevent overlooking at certain points.

The new building at Grange Primary School, designed by Maccreanor Lavington, scooped a RIBA London Award for the ‘series of characterful pavilions on the street front, providing a dramatic public presence’. This project involved the addition of 105 pupil places and an improved school entrance, as well as a dining hall, kitchens, nursery, library, offices and new school house.

A series of eye catching roof profiles run along the street facade, providing a ‘fun and friendly entrance.’

The selection of light stock brick and dark metal roof of the new building references the original school and are detailed to present a civic character.

The new hall is a large church like space with a large picture window at one end looking onto the trees in the green space opposite the school. Student bathrooms adjoin the hall with the school canteen.

The new ribbon of buildings around the perimeter wrap the site like a wall making the interior safe and protected.

The new library is designed to be rented out to the community for evening and weekend classes.

The nursery has saw-tooth shaped roof letting natural light in, with long small rectangle windows at children’s heights. The nursery can function self-efficiently with toilets, washing machine and own sheltered playground which connects with the reception and year 1 playgrounds.

Another winner of a London RIBA Award was Ivydale Primary School for its new building designed by Hawkins\Brown.

The strong distinctive graphic and colour scheme on the front facade continues within. This colour palette is calming and welcoming, while providing students with a more ‘grown up’ feel as a stepping stone to secondary school.

The entrance to the school over a zebra crossing is large, secure and works well for visiting classes of thirty children from the existing Victorian building. They enter into a large circulation room with a staircase leading up to the first floor. This space doubles up as another hall space for whole school assemblies with the stairs used as tiered seating.

The plan of this new school works very well and is easy to navigate for students, staff and visitors.

A large school hall is at the heart of the school. It can be divided into two rooms with a sliding wall or used as one large space. Large shop window panes are used to see into the hall on all four sides from circulation spaces. The school eats lunch in the hall with the canteen adjacent.

Each classroom is a good size with plenty of light flooding from two sides that can be reduced with blinds on all windows. By each classroom window there is a reading nook providing a cosy space for a student or two to sit, read and ponder. Large shop windows in each classrooms in the circulation spaces make the rooms feel less enclosed so students do not feel trapped in one room.

Circulation spaces are light with roof lights and voids on the first floor down to ground floor allowing for connectivity and an open friendly feel.

The playground is part of the design including different play zones of a woodland garden and a wide range of play equipment. Each ground floor classrooms have an ‘outdoor’ classroom.

Kingsgate Primary Lower School by Maccreanor Lavington Architects in the London Borough of Camden was another worthy winner of a RIBA London Award 2018.

This inner city school and new public space is significantly set back from the street, providing an intelligent urban design solution for parents to drop-off/ pick-up without causing congestion on the residential street.

The public space also opens up a new connection to the neighbouring park, which was once a dead-end and under utilised green space.

The large covered entrance to the school offers glimpses into the playground while providing a protected environment for the children.

The distinct roofline of the saw-toothed and double-pitched roofs pays homage to the industrial past. This is also picked up in the children’s drawings of the school. It also helps to bring excellent levels of daylight through the north clerestory windows into the teaching spaces, offering a spatial and serene quality throughout the school.

The robust, lightly stained timber surfaces and panelled walls conceal storage spaces and a careful layout of lobby areas for cloaks and storage also buffer the space between the ground floor classrooms and the outdoor play space in the colder periods.

The grand assembly hall is impressive

and reminiscent of the scale of a Victorian school hall with its huge volume and pitched roof. It is flexible and can be divided and used as a dining and sports hall with plenty of integrated storage space for equipment to be tidied away.

Kingsgate makes successful use of the site, within a carefully considered masterplan that addressed the adjacent railway line and benefits from a southern aspect, creating a ‘connected’ public space

Sandringham Central at Sandringham Primary School, designed by Walters & Cohen Architects also scooped a RIBA London Award for challenging the normal assumption that a ‘building for children should fortify and obscure itself from the public street it shares.’

The new building replaces an old, poor quality nursery building that was set well back from the street edge, and had a cramped, awkward entrance tucked away from the street that seemed to turn its back on the school.

It embraces its location within the existing terrace of two storey houses aligning its building frontage with the houses adjacent and replicating the form of the neighbouring pitched roofs.

The contemporary building has a façade and pitched roof clad in zinc with deep recessed entrance windows, welcoming and transparent to the street, providing views in to the nursery’s activity and energy within.

As the façade aligns with the neighbouring façade, but without the need for a front garden, the pavement was widened to double the width, demonstrating the project’s generosity to the surrounding area.

The main nursery space is well proportioned with robust materials and touches such as the star patterned acoustic ceiling and green grass carpet rugs alongside the large areas of glazing connecting the room to the playground outside.

The upstairs rooms include the eaves of the pitched roof ensuring they are spacious, tall and airy. The timber panelling softens the spaces and gives them a quality.

The quality of finish is very good, and the attention to detail evident. The influence on the brief, and the deliberate overlapping of nursery and primary school functions is cleverly handled and effective at preventing the nursery’s isolation from the rest of the school.

Streatham and Clapham High School, by Cottrell and Vermeulen Architecture, were also presented with a RIBA London Award.

The sixth form centre is a new structure predominantly made of timber. The new floor is book-ended by study and common spaces connected by a spine of classrooms, offices, a science laboratory and service spaces.

The internal spaces of the class room and study areas are characterised through a prominent use of timber, finished in exposed cross laminated timber panels. Internal window mullions and impressive tree-like cross-columns feature within study and common rooms.

The rooms have very good natural light with eaves hung over the main windows and skylights. It is an overall rational design with some irrational/playful exposed timber structures in the common and study spaces.

The new ground floor addition, while forming a new entrance and a new public face for the school, acts as a focal point in a different a baroque type architectural, language, enlivening the first point of contact with the school