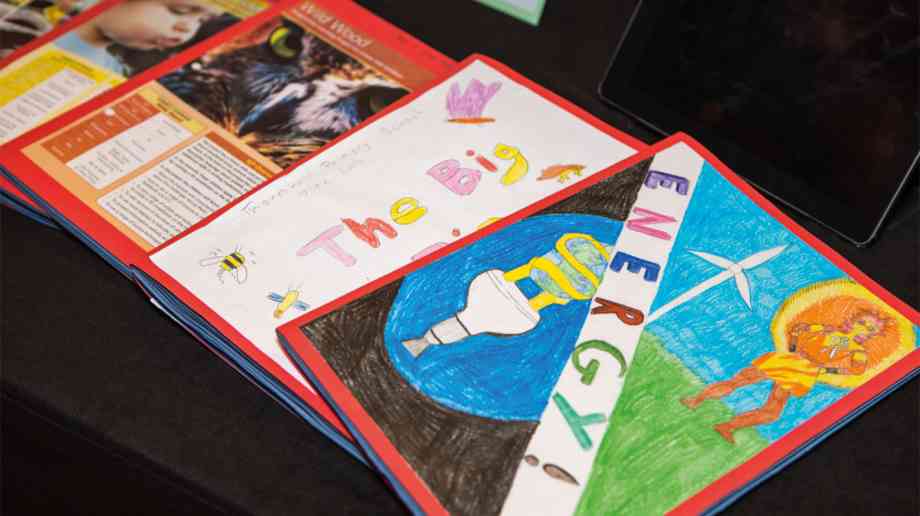 Rewarding the pioneers of green schools

The 2015 Ashden Sustainable School Awards were a great example of how schools can employ more sustainable practices to become more energy efficient.

What do a tiny primary school in Lincolnshire and a huge college with a further education wing in Nuneaton have in common? On the surface perhaps very little, but they are both winners of a prestigious green energy award for their commitment to cutting carbon emissions and lowering fuel bills.

At last year’s Ashden Sustainable School Awards, Marton Primary School in Lincolnshire, North Warwickshire and Hinckley College (NWHC) in Nuneaton, Home Farm Primary School in Colchester and Thornhill Primary School in Cardiff each received a prize of £3,000 at the ceremony held at LSO St Luke’s in London. All four have succeeded in reducing their energy consumption as well as inspiring their pupils and students to do their bit to help save the planet through a series of easy to implement measures.

At the Awards ceremony, Ashden’s Founder Director Sarah Butler-Sloss said: “We are delighted to see such a broad range of school winners – from a small rural primary school with just 97 pupils to a large further education college with over 14,000 students. We have our first Welsh school and a primary demonstrating that an energy‑guzzling building can be transformed into an efficient, energy-generating exemplar.”

On the road to energy self-sufficiency
Finding ways to cut energy bills can really help already stretched school budgets. When head teacher Richard Potter took over at Home Farm Primary School in Colchester, he was faced with an inefficient building and large energy bills. He had previously been employed at a newly constructed school which had been designed with many sustainable and energy saving features. He had experienced both the financial and environmental benefits of a heating system which could be controlled and managed properly.

His challenge was to create a sustainable learning environment for the students and reduce the school’s energy spend. Additionally, the school had an internal courtyard which, due to the layout, meant that heat was continually lost through open doors. The first primary school in Essex to be awarded a Grade B rating in its Energy Performance Certificate, Home Farm is a model of good behaviour. Between the dream team of Richard and school business manager Ceri Stammers, they have managed to turn around a poorly managed heating system and a heat-leaking building to make Home Farm virtually self-sufficient in energy.

One of the simplest yet most productive moves was to enclose the central courtyard which has reduced gas consumption to 60 per cent of what you would expect from a building of this type. The school has also seen a 61 per cent reduction in its electricity use. Solar panels were installed which produced a Feed-In Tariff (FIT) payment of £3,700 within the first ten months of operation. The model for the installation resulted in the replication of the system at five other schools in the county by the same contractor. The financing of the solar photovoltaic (PV) panels is on a lease arrangement and therefore self-funding.

A holistic approach to sustainability
NWHC’s holistic approach to sustainability has seen it reduce carbon emissions by more than a third in the past five years. The energy efficiency measures put in place – such as improved insulation, better boilers, and the introduction of LED lighting and sensor controls – are resulting in major savings to both the college budget and the environment. IT team leader Maj Shaikh, himself a former student, has actually redesigned the IT facilities to reduce electricity use by 35 per cent.

Sustainable energy activities at NWHC began in 2010 when the Carbon Trust assisted the college in developing a five‑year £2m Carbon Management Plan (CMP), which set an ambitious target for the reduction in carbon emissions by the end of August 2015. But the big question was, where do you start when you have several campuses and thousands of students?

Serena Baccuzi, the Group Sustainability Officer for the College and the Estates Team, led the energy management of the college. The sustainable energy work focused on reducing consumption through behaviour change, improving housekeeping and monitoring, a gradual programme of energy saving investments and the installation of a 50kWp solar array on the Nuneaton building. NWHC also worked hard to promote energy saving messages to staff and students through a range of events.

The college has an ongoing refurbishment programme that includes measures to save energy such as energy-efficient boilers, improved insulation, double glazing and heating and lighting controls. For example, along corridors the natural lighting sensors switch off the lights when they are not required. A team attitude to reducing consumption and building energy efficiency awareness, involving senior facilities managers and maintenance staff, is resulting in major savings to both the college budget and the environment. This has created a win-win situation, especially in an establishment that covers several different locations and is used by over 14,000 people.

Steve Sawbridge, from the Association of Colleges, said: “Their approach to sustainability, energy saving and carbon reduction is at the forefront of good practice in the sector, and has the benefit of being a showcase for other colleges wishing to implement sustainability measures.”

Pupil engagement
There are 2,500 primary schools in England with fewer than 100 pupils and collectively they have a significant carbon impact. Many small schools consider their energy use to be too low to worry about, but these are the schools that can make changes quickly, and deliver a greater collective saving. Marton Primary School in Lincolnshire wanted to stand out from the crowd and show that even though it is a small school, it can make a big difference.

As a result all staff and the 97 pupils at Marton Primary School in Marton, Lincolnshire, are aware of carbon saving efforts. There are just four classes and head teacher Ben Stephenson and senior teacher Naomi Maguire go the extra mile to ensure that the children have a strong voice in determining the energy saving processes. It was the youngsters who insisted on changing their lunch break time so as not to prolong meals being warmed by an electric food warmer – pupil power in action.

Activities began with the appointment of three pupil Carbon Ambassadors from Year 5 and 6 who carried out an energy audit of the school to develop a plan of action to reduce the school’s carbon footprint.

The focus on behaviour change is immediately obvious at the school. All lights and equipment are switched off when not being used. There are stickers and posters around the school encouraging energy saving. All switches have been coded green or red by the pupils so that everyone knows which ones they can switch off. Twice a year the school participates in the local authority’s ‘Switch-Off’ day, and for this a 50 per cent reduction in energy use is the norm. The school uses these two events as a reminder of what can be achieved.

Year 5 and 6 pupils even use energy data for data handling exercises in mathematics and IT. Simon Green, class teacher, has used the energy data and meter readings to set a series of tasks for pupils to analyse energy usage and compare consumption over weeks, months and years.

Overall Marton has made some impressive savings, reducing energy consumption by 30 per cent between 2011 and 2014 and the fact that they have 100 per cent LED lighting throughout is estimated to save 12 tonnes of CO2 per year. The Ashden Sustainable School Awards judging panel found Marton Primary School to be an excellent role model for other small schools where the staff and pupils have adopted a very simple approach, focusing on low cost or no cost actions such as behaviour change to really make a difference.

Energy data pays off
Thornhill Primary School in Cardiff holds a similar belief in the power of behaviour change. Their crack squad of student eco‑warriors keep energy wastage to a minimum with their spot checks on whether lights and appliances have been left on in the classroom. Records are kept for a competition between year groups with a trophy presented at assembly for best performance.

Head teacher Paul Tucker has an excellent oversight of energy use in the school thanks to regular monitoring of energy consumption. Because he has a full understanding of the school’s energy data provided by the Carbon Culture website, this enables him to keep track and compare performance with previous years.

Solar panels, LED lighting, a building management system and more efficient IT facilities mean that electricity consumption has reduced by almost a third since 2011/12. The school’s willingness to trial new ideas and share the results with others, along with its determination to reduce carbon emissions to the absolute minimum, is what makes it the first Welsh school to be a winner in the Ashden Sustainable School Awards.

Thornhill now plans to introduce more renewable energy and technology to help it to continue to reduce its energy use. It also has further projects planned like rainwater harvesting, and is aiming to become as close to a carbon zero school as possible.

The Ashden Sustainable School Awards reward schools that have developed both an ethos and practice of sustainability, in which the responsible use of energy is a key component. Ashden looks for winners that integrate the sustainable use of energy into the curriculum, pupil and staff behaviour and the school building and grounds; winners that will inspire other schools to follow them. Any school for 4-18 year-olds based in the UK, whether state, independent or academy, can apply.

Further Information
To register an interest in the
next awards, go to www.ashden.org/

Ofqual confirms how exams will be awarded in summer

Ofqual sets out details for schools, colleges, students, parents & carers on how GCSEs and A levels will be awarded following the cancellation of this year's exams.

Advice for avoiding a 'lost generation of learning'

The Education Development Trust has published nine recommendations to policy makers to prevent a 'lost generation of learning' because of the school closures during the COVID-19 crisis.

Changes to induction for newly qualified teachers during COVID-19

The Department for Education has published guidance on the changes to newly qualified teacher (NQT) induction during the COVID-19 public health emergency.

Furness Academy to be converted into hospital for recovering patients

Furness Academy in Cumbria is to be converted into a makeshift hospital to provide care to recovering patients who have been in hospital.