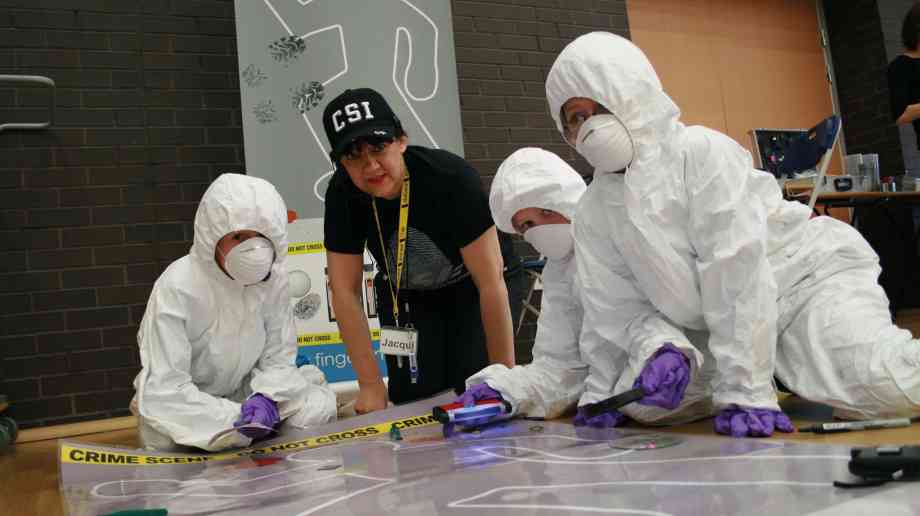 Celebrating science in your school

Taking place on 11-20 March, British Science Week will once again challenge schools to engage in science, promoting innovation and inspiration for a generation of pupils in the UK. The British Science Association’s Elspeth Houlding provides an insight to the week.

British Science Week is back again, bigger and better than before. Over 10 days, thousands of events will take place across the UK from 11-20 March, celebrating the impact that science, engineering, technology and maths have on our daily lives, with engaging events, fascinating talks and hands-on activities.

Three thousand events are taking place across the UK meaning that getting involved in British Science Week is really easy to do, and will allow you to showcase your school’s openness to science.

Last year, there were over 5,000 events on all manners of different topics, including a fireworks display at the Science Museum in London, a debate on overpopulation in Cambridge, an engineer rescue team workshop in Glasgow, as well as much, much more.

However, this year, we want to make it even bigger! Our events database is growing each day, so it’s easy to find an event near you on our website – you could even organise your own event and register it on the site. There’s plenty of resources on helping you put together your own activities, whether it be a celebration in a church hall, a science demo in the classroom, or a workshop with a local expert.

Start planning your classroom activities by registering your event. All teachers who register between 23 February and 10 March will be entered into a draw to win one of ten Educator memberships worth £25.

You can register for free, and students can upload evidence of their events, poster competition entries or other British Science Week activities to gain the relevant badges.

A large live school experiment
On Thursday 17 March, secondary school teachers of science will be taking part in Demo Day, celebrating the art of the science demonstration and showcasing creative, practical demos. Other subjects can join in too – food tech, music and PE will be using live demonstrations to showcase the science of their subject. Last year teachers described Demo Day as a great way to raise the profile of their subjects within school, and also a fantastic opportunity to motivate and fire the curiosity of students. Events ranged from a heart rate experiment in the school gym, to creating hot ice cream, lava lamps and elephant’s toothpaste. Some teachers invited families in to participate, and others hosted Demo Day as an event for local feeder schools.

Demo Day has run successfully for the last two years in hundreds of schools across the UK. In 2016, we want to encourage even more schools to get involved – both those who run in-class demos often, or who have taken part in Demo Day before, and those schools who are less familiar with demonstrations. There are plenty of resources available (see below) to give teachers and technicians ideas, inspiration and confidence to run demos with students.

By pledging to take part in Demo Day in March, teachers receive brilliant free resources and new ideas for demonstrations on a wide range of topics. Let’s not forget to inspire our SEND students - we’ve put together some expert tips to ensure everyone can get the most from your Demo Day.

It’s not just for scientists: science is all around us…

Behind the British science scenes
Fascinating science, engineering, manufacturing and technological innovation is taking place on everyone’s doorstep all over the UK and Behind the Scenes of British Science brings this to the fore.

We’re throwing open the doors of Britain’s most fascinating science, technology and engineering locations, operation sites and laboratories, sharing the science that is happening at your company or organisation to your local community.

Become a citizen scientist
For 2016, we’ve teamed up with Zooniverse to bring you the citizen science project Bat Detective – where you can help identify species of bat by listening to their calls.

Forget what you’ve read about humans having terrible hearing and sight, we actually have great audio and visual skills, enabling us to easily tell apart animal calls from other noises.

The Bat Detective project team needs your help to go through the sonograms and pick out the different calls.

First launched in 2012, nearly 4,000 volunteers have explored almost 100,000 audio snapshots and more than 11,000 bat calls have been discovered. The team have been able to use this data to develop algorithms that can automatically search for and detect bat calls in audio recordings with a very good success rate.

While the team are a step closer to developing automated software for accurately detecting and species-identifying bat calls from recorded audio, they need your help to classify more data to help them do this. During British Science Week, we are aiming to complete a further 100,000 classifications.

This year, the theme for our activity packs and poster competition is ‘Spaces for Science: Science in Spaces’ and is all about the different places where science can be found and done. We’re focussing on five different types of space; open space, outer space, digital space, built space and personal space.

Young people across the UK are invited to enter the British Science Week annual poster competition. Take a look on our website for inspiration and to check out the terms and conditions.

CREST Awards
Each year, over 32,000 CREST Awards are undertaken by 11-to-19-year-olds, giving them opportunities to explore real‑world science, technology, engineering and maths projects in an exciting way.

CREST Awards are student-led projects that recognise success, and enables students to build their skills and demonstrate personal achievement in project work.

In the 30 years that the CREST Awards have been running, we’ve witnessed how doing practical, creative science and technology projects have increased students’ enjoyment and understanding of science, but now we’re proud to share evidence of the CREST Awards scheme’s impact on academic attainment, too.

The Pro Bono Economics report, conducted by a group of volunteer economists, has discovered that students who take part in CREST Awards get better GCSEs and are more likely to pick STEM AS Levels.

Imran Khan, chief executive of the British Science Association, said: “As a society, we need more and more young people who are curious about, and comfortable with, science – not least to ensure that we have a competitive economy and vibrant culture – so we hope that this report encourages more young people, teachers, schools, and parents to explore science and technology through the CREST Awards.

“I would like to take this opportunity to thank the whole team at Pro Bono Economics who have volunteered many hours of their own time to produce this report, and to make some excellent recommendations for the BSA and education sector to take forward for the future.”

David Willetts, chair of the British Science Association, said: “The BSA has been running the CREST Awards for almost 30 years. We have long-suspected that CREST is a great thing, of course – but we now have quantitative evidence to suggest that undertaking CREST Silver Award appears to have a positive impact on students’ GCSE grades and the likelihood of them continuing on study STEM.

“That in itself is hugely significant. However, I am particularly interested in the finding that there is an even greater impact on students who are or have been eligible for free school meals.”

Removing barriers to access
The British Science Association is also delighted to announce government support for a new digital platform to support its CREST Awards scheme. The Department for Business, Innovation & Skills (BIS) has agreed a grant of £270,000 to develop Digital CREST, a new digital platform to enable more young people to participate in its CREST Awards scheme.

CREST Awards, the UK’s largest national award scheme for project work in Science, Technology, Engineering and Maths (STEM) subjects, enrich students’ interest in STEM subjects and careers. The Association wants more young people to benefit from doing CREST in their schools, youth clubs and homes. Over 30,000 11 to 18-year-olds achieve CREST Awards every year, 51 per cent of whom are girls – and we intend to grow this to over 60,000 over the next two years.

The digital platform will help to remove barriers to access for schools not currently involved in the programme, especially students and teachers in disadvantaged and remote areas. It will provide a streamlined way for teachers and students to sign up and receive guidance on the CREST Awards process and enable more volunteers from academia and industry to help young people with their CREST projects.

Jo Johnson, Universities & Science Minister, said: “By recognising the hard work of pupils and teachers the CREST Awards are helping inspire young people to follow a career in STEM. Our investment in this new digital platform for the awards will recognise the hard work of pupils and teachers across the whole of the country and help secure the UK’s position as a world leader in science and innovation.”

Khan added: “We are extremely grateful to the Department of Business, Innovation and Skills for awarding us this grant that will enable us to transform the CREST Awards programme and expand its reach. The BSA wants all young people to have the chance to experience the excitement and creativity of science in a context that fits their own identity and interests, and - through its student-led approach – CREST provides that.”

The British Science Association coordinates, delivers and oversees a number of different projects and programmes aimed at engaging more people with science. We work across the UK through our network of regional branches and by building partnerships with national and local organisations that match our vision of a world where science is seen as a fundamental part of our culture and society.