On 22 June, the Royal Institute of British Architects (RIBA) announced the winners of its prestigious National Awards for architecture. Amongst the 49 winners, there were numerous educational buildings, noted for their innovative and exceptional design.

RIBA President Jane Duncan said: “Congratulations to the clients and their design teams for the extraordinary talent, ambition and enthusiasm that has led to this year’s roll-call of phenomenal buildings.

“RIBA National Awards provide insight into emerging design trends, as well as showing how well the profession responds to economic drivers. I am delighted to see such confident, innovative and ambitious architecture delivered in such challenging times. I am pleased to award a selection of high-quality new school buildings such as The Laboratory, Dulwich College and new music facilities at Wells Cathedral School, that will benefit generations of children and teachers.

“However, after a few boom years, which saw a clutch of award winning, cost effective state school buildings, it’s disappointing that there are none on this year’s list. Well-designed schools support improved student achievement, and staff and student wellbeing and should be part of educational aspirations for all our schools, not just those in the fee-paying sector.”

RIBA describes the Laboratory of Dulwich College as an “immaculately detailed science lab and is a virtuoso of finish and precision.”

RIBA goes on to describe the building, which was designed by Grimshaw Architects, as successfully balancing and complimenting the impressive 1870s New College by Charles Barry Junior by picking up on the red bricks and beige stone colours in a panelled façade.

Sculptor, Peter Randall-Page developed the façade’s pattern in a workshop with boys from the school, based on an algorithm found in all branches of science. The result is magnificent and completely appropriate for the site, with its fiercely competitive existing buildings.

An elegant S-plan wraps the science labs around two central communal spaces: the timber panelled hallway containing Shackleton’s boat and the lecture hall, which operates flexibly with retractable seating, for a range uses. The two communal spaces continue conceptually through large curtain wall glazing, to communal courtyards. The science labs themselves were particularly bright and beautiful, with floor to ceiling windows affording views across the campus.

Also scooping a RIBA National Award, King’s College School in Wimbledon was founded in 1829, but moved to its present site in 1897. This new building by architects by Allies and Morrison provides new teaching accommodation and improved circulation in this part of the campus. This is a clearly planned and elegantly detailed addition to what was already an orderly public school site. The project provides new classrooms, offices, a multi-use double‑height hall and a linking corridor attached to an existing science block. The new T-shaped brickwork building opens up to a courtyard on one side and suggests the potential for a future one on the other. Gabled slate and metal-clad roofs not only fit with the surrounding school architecture, but also provide elegant ‘attic’ internal rooms at the top floors, and allow the creation of a lovely chapel‑like, timber lined, meeting hall space.
Internally, the building excels in its thoughtful detailing, which is well considered and carefully executed.

Designed by architects Stephenson Studio, Chetham’s School of Music’s auditorium is the concluding element of the school’s new academy building. The building without the auditorium previously won an RIBA Award and was submitted with the auditorium unbuilt but as a shell. Subsequently funds became available to complete the project and the new auditorium was submitted as a distinct, separate and later project.

As a part of an already successful larger project, this space had to be judged on its own merits and detached from its context.

The jury’s arrival was greeted by a single cellist performing on the stage, allowing them to enjoy the clarity of sound from every part of the auditorium. It is a simple room in which the lightest of surface touches both modulate the sound and unify the space. The complex business of its stage adjustments, the moving of banks of seats and its transformation from acoustic to amplified performance is all handled with a confident discretion. It is a space that feels complete in any form. Devoid of gimmicks, it is a space that, for the audience, focuses on the performance and for the performer, it is clearly a pleasure to be a part of. 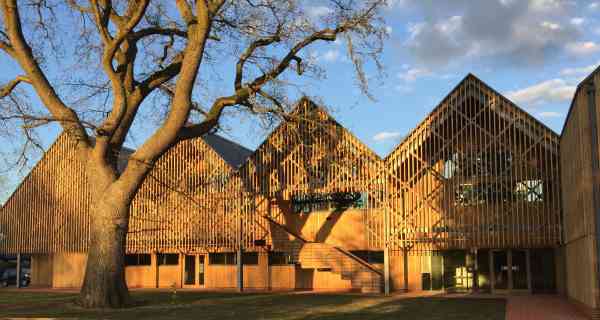 This project creates a new art and design building, in a key location on the Bedales School site to replace the existing facility. The school purposely restricted the budget (to avoid the buildings-arms-race), acknowledging that an economy of means is a lesson in itself. The architects were able to apply lessons from Manchester School of Art, to deliver something of value in a smaller building, with a constrained budget.

The project, by architects Feilden Clegg Bradley Studios, included meaningful student involvement throughout the process; from inception and participating in the selection of the architect, through to use of spaces and detail. This meant a very usable and functional building has been created.

The honesty of the building’s material expression allows users to see how it was put together, which really chimes with the school’s idea of creating an educational instrument, especially given the school’s interest in ‘hands on’ building construction. For the spatial arrangement, a lead was taken from the previous well-lit single-storey interconnecting studio block and passing between each of the studios, hence seeing each of the design disciplines to reach the next.

The single-storey existing studios have been re-invented over two storeys, with generous overhangs to make external spaces for use by students, which was also a conscious move to manage area and the tight budget. This is a building that engages with the landscape, bringing the outside and inside spaces together, and with the use of simple materials which help to make the two be read together. Playful use of light through layering of lattice screens to façade and external covered areas offers a joyful and varied experience for users and visitors alike. It is a piece of intelligent client commissioning and a great design response.

Cedars Hall, the new music facility at Wells Cathedral School, is used for the teaching, learning and performance of music. The building lies at the historically significant axis of Wells Cathedral Chapter House, and both function as gathering spaces for the local community. Acoustic requirements dictated the volume of the recital hall and the design sought to minimise the impact on the listed landscape and maintain views to the cathedral by using the sectional device of partially burying the performance space and employing a set-back clerestory at roof level.

The clerestory roof is articulated with four giant columns and a timber roof form which serves to modulate the acoustic interior. The main hall can accommodate 400 people. On the upper floor, there are dedicated spaces for woodwind and percussion, each with glazed observation rooms for the specifics of teaching music. The generous top lit foyer built against the curve of the listed wall doubles up as a brass section rehearsal space.

A gently sloping curved path to the entrance follows the line of the historic liberty wall. The building contains a technically excellent recital hall and interconnected spaces for teaching, rehearsing, performing and recording.

This new building, which was designed by architects Eric Parry, compliments the school’s former regular venue, Wells Cathedral, providing much needed flexibility and choice of performance, teaching and rehearsal spaces.

The new building has fine and elegant proportions, massive recessed glazed screens punctuate the equally massive corten walls. Neither material has a single joint and is 5.2m high by 2m wide. The choice of corten steel cladding, whilst controversial for some, has proven to be an inspired material that changes in appearance with the changing daylight, whilst giving the impression of having always been there. 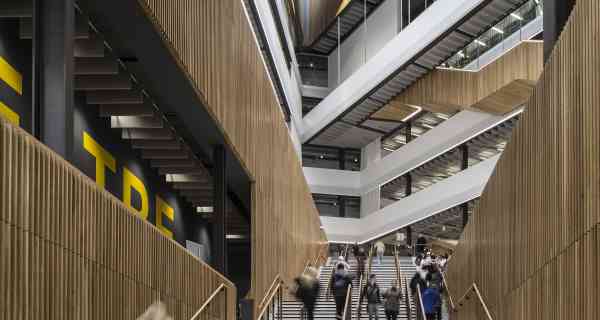 The merger of Glasgow’s central, metropolitan and nautical colleges created a super college bringing together facilities and teaching previously housed in 11 separate buildings across the city within two new central campuses. The new campus of City of Glasgow College is more than 60,000m2 in size, and is the second of these large new buildings. It brings together six major faculties in 300 high-tech classrooms, multi-purpose lecture theatres and specialist teaching facilities.

While the initial impression of this building is as something of immense scale which also signals its presence as an important place of learning, its internal spaces are designed to encourage both the formal teaching processes which it contains and informal, more chance encounters. The materials palette and form of the building are deliberately restrained to generate something of skill, clarity and elegance, on the grandest scale.

There is an astonishing scale and complexity to the brief for this project and considerable architectural skill is demonstrated in its realisation; not just in resolving the brief, but in the contribution to the city – in massing, composition and the generosity of the public route through the grand stepped atrium space. This architectural skill extends beyond the cityscape through to the detailed care taken in the organisation of student spaces, encouraging social interaction across disciplines, to the considered approach to materials and detailing. This project was designed by Reiach And Hall Architects and Michael Laird Architects.